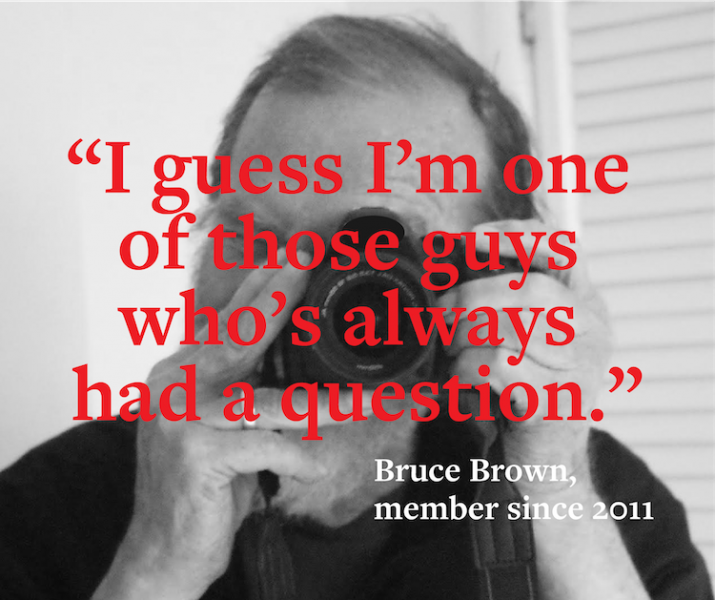 Chances are, you know Bruce Brown. Or at least have seen Bruce in his current iteration as a postage-stamp-sized head on Zoom. Whether you’ve attended an OLLI @Berkeley opera course, a history course, a rock ‘n’ roll course, a course on how the brain works, on whether extraterrestrial life exists, on the ins and outs of baseball — or on dozens of other topics — it’s likely that Bruce has been there with you, taking copious notes and asking informed questions.

Bruce joined OLLI @Berkeley about a decade ago. He signed up at the urging of his wife shortly after moving to El Cerrito from Modesto, where he had worked for E & J Gallo Winery for 34 years, starting as a lab tech and rising to Analytical Lab quality manager. 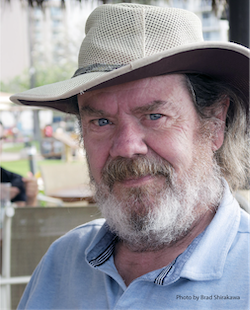 It didn’t take much to persuade Bruce to become a member. He only knew a few people in the area and OLLI seemed like a good fit for someone who loves to learn, is deeply curious about pretty much everything, and is always interested in meeting new people. A veritable trifecta.

When asked what people would be surprised to learn about him, Bruce responded, “Probably that I never completed high school.” OK. Yes, surprising. After deciding high school wasn’t for him and then working for a few years in the stock room for Blue Chip Stamps (remember those?), Bruce attended community college in Modesto (you didn’t need a high school degree in those days) where he received an A.A. He then went on to get a B.A. from California State University, Stanislaus.

If one of his community college professors had had his way, Bruce would have finished his undergraduate work at Berkeley. “He was a Cal graduate,” recalls Bruce. “He took me up to visit the campus. This was in ‘68. He introduced me to all these professors and really encouraged me to apply. But at that time, I would have had to borrow money for living expenses, which, in retrospect, wasn’t that much. But I had a reality check. I was planning on majoring in Geography, which I loved, but really, what was I going to do with a B.A. degree in Geography?” Bruce took the more pragmatic route, majoring in Business with a minor in History at his local CSU. Over the years, he supplemented his learning by taking assorted chemistry classes and even a year of law classes at night. Because, why not?

For Bruce, one of the pluses of OLLI is the connection between members and faculty, which he likens as more of a peer-to-peer relationship. Bruce has become friends with some of the instructors, most of whom have told him that when it comes to teaching at OLLI, "they have to bring their A game, because they’re talking to people who know stuff already.” Fact check: True!

Like many members, Bruce can’t wait to reconnect for in-person courses — and for everything that typically happens before and after class time such as going out for lunch with friends, new and old. He also looks forward to once again bringing his camera to OLLI Happy Hours and on field trips, documenting the events.

Until then, Bruce is happily attending classes and presentations online, reading voraciously, per usual, and looking forward to seeing his out-of-state children, grandchildren and two great grandchildren in person again.