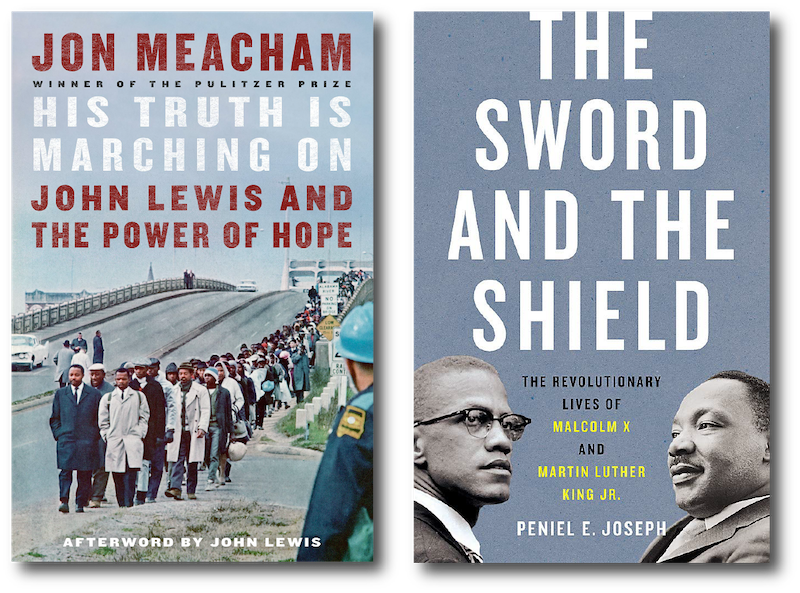 If you are in my age group, born during WWII, you surely have vivid memories of the Civil Rights era of the 1960s which occurred during our young adulthood. Reading recently published biographies of three iconic figures from that era has been revelatory to me. These people each changed the course of history and if you are willing to shed a few tears while reading these poignant portraits, this is for you.

The first biography, His Truth is Marching On: John Lewis and the Power of Hope by John Meacham, was published this past July right after Lewis’ death at age 80. This book is powerful, heartwarming and elucidating. After reading it, I recognized the saintly personage who Lewis was in terms of courage and commitment. Like other heroic figures in the 20th century such as Mahatma Gandhi, Lewis relied on non-violence as a way to achieve social justice and equality of the races. His bravery and character cannot be overstated. Because he lived a full life, I remained aware of his political activity until his recent death.

There is a second and newly published book, The Sword and the Shield: The Revolutionary Lives of Malcolm X and Martin Luther King, Jr, by Peniel Joseph, which is a unique dual biography book and is the Civil Rights history book for our time. Each of these iconic figures was assassinated in the mid to late 1960’s, thus drastically shortening their lives. As a result of their premature deaths, my faded memories of them were replenished by this profound book.

These two icons had contrasting ideals—black power and civil rights for Malcolm X vs. self-defense and nonviolence for MLK. In fact, King was so committed to non-violence that he wrote an editorial on the 10th anniversary of Gandhi’s death stating that “humanity faced a choice between non-violence and non-existence.”

This book posits, however, that King’s anti-war and anti-poverty campaigns vs. Malcolm’s impassioned anti-colonialism were not entirely what they seemed. That is, King was more revolutionary and Malcolm more pragmatic than we have been led to believe. Their politics and activism overlapped and intersected, and their intelligence and dazzling oratory set them apart from other activists of their generation. Despite some similarities they were quite different, including Malcolm being extensively involved with racial justice issues in many African countries, whereas MLK was focused primarily on the American racial divide.

Malcolm’s parent organization, the Nation of Islam, did not reach across the religious divide to include equality for all. Nor for that matter, did it seek equality even for Black women. It was mostly about “Black Power” and racial extremism, including racial separation and self-defense. Malcolm’s commitment, although occasionally misguided, was no less potent than MLK’s, but the two of them never engaged politically and met only once briefly in 1963 after a Senate meeting on civil rights issues.

This second book provides extensive and detailed descriptions of activities during the 1960’s Civil Rights era. Malcolm X was eventually assassinated by three members of the Nation of Islam in February 1965 after years of contentiousness and conflict within that political/religious entity. Rumors exist until this day as to who exactly was involved in his assassination. He was killed at age 39.

MLK won the Nobel Peace Prize in 1964 elevating him to international prominence and esteem. In contrast, the FBI held extensive secretly obtained evidence of multiple extramarital affairs that MLK was involved in and often leveraged this against him to keep him in line. In 1965, MLK influenced President Johnson to sign the Voting Rights Act, but by 1966 King had a complete break from the Johnson White House as it had drifted away from advancing the ambitions of the Great Society to greater involvement in the Vietnam War.

By 1967 King denounced the war in unequivocal terms. This politically chaotic period continued into 1968 when resistance to the Vietnam War grew and people began to encourage King to run against Johnson for President in the 1968 election on a non-violent anti-war platform. King encouraged the use of radical civil disobedience to leverage the will of ordinary people. Tragically, he was assassinated in April 1968 at age 39 by a lone white assassin abruptly ending his impact on that era and changing the course of history.

These two books brought back memories and enhanced my knowledge of that era and gave me a better historical perspective into today’s struggles for racial justice, which will likely shape the future of American society. America is again at a crossroads with great numbers of white nationalists in America who vote with that perspective in mind. Conversely, many Americans abhor that perspective which has persisted since the founding of our country and are identified with establishing equality for all, regardless of race.

Who will become our new Civil Rights leaders to carry the torch and bend the arc of justice further toward freedom for all during the 2020’s? Once you have read these two books which are primarily about the 1960’s, I expect you will have greater insight and perspective into our current societal conflicts in this area.