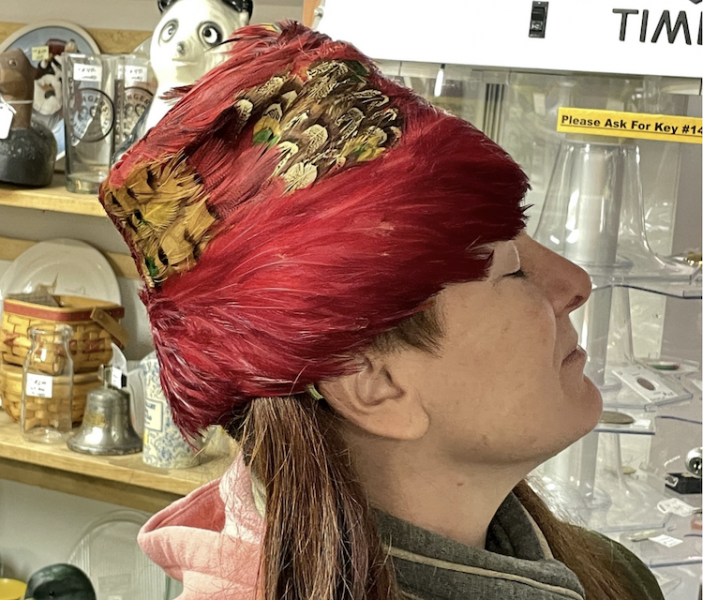 Driving North to Black River Falls, a small midwestern town half-way between Minneapolis, where my youngest daughter lives, and Madison, where I was spending Christmas with my oldest daughter, I scan the mostly farming and forest landscape. Nothing in California looks like this — scrub oak, miles of pine forest, the huge barns of corporate farms and smaller ones of family farms, the ubiquitous white clapboard farmhouses and snow — they all spell Wisconsin, the dairy state. It is mighty cold on December 27 and I have not driven by myself over this distance in a long time. I wondered beforehand if I would be anxious about driving alone, especially in the snow, for long freeway miles. Other than cold feet and needing the bathroom sooner than expected, I am relatively calm and alert. Good news.

I am meeting my youngest daughter Paige who is to drive South to an Air BNB on the river in Black River Falls. I have not seen her in more than two years, not the previous Christmas or the Christmas before. She is the outlier in our family, the unvaccinated, maskless conspiracy theorist. She sends me podcasts and YouTube videos of political analysts who are sure of vile corruption in our government, and intentional misinformation blanketing our population. She is also the most generous of spirit of my three daughters, the one who asks after my health and wellbeing, the one I talk to for hours on the phone.

I know there is a chance she will not show up. She didn’t show up for our family reunion last summer in Boston. She said “I have nothing to say to them, Mom, and they live very different lives from me.” I mused, sadly, that the 20 members of her biological family who did attend would find her more a curiosity than a cousin. She didn’t show up for my 75th birthday at the Grand Canyon. She texted just when we (my husband, my middle daughter and I) reached the Phoenix airport, “I’ve overslept, missed the plane, and am not coming.” Mostly, I think our relationship is solid (hers and mine), but I can never be sure that its solidity is enough of a reason for her to show up.

I arrive at the BNB to what looks like a bunker, a white-painted, concrete rectangle with a flat roof and only small rectangular windows near the roof line. There is a decorative metal fence between the garage and the woods. The river is visible through the fence. Tom, the co-owner with his wife Verona, has just finished plowing the driveway and lets me into the door to our unit as it is several minutes before 4PM when the entry code on the door would have done the same.

Paige is not here. I immediately look at my phone. A text tells me that her rental car company was late picking her up and she will be here soon. I cross my fingers. The unit is a lower level, open space living-dining-kitchen and two bedrooms and a bath. It is carefully decorated in mid-Century modern furniture. I take the back bedroom with the only window facing the river, although the window is built into a deep well. Its top is at ground level and only the sky can be seen by craning my neck and looking upwards. Light comes in, but no river is visible from here.

Paige arrives perhaps half an hour later and I heave a huge sigh of relief. I show her my bedroom and hers (closer to the living room so she can stay up all night without disturbing me if she wants). She has a window too, but it is a fake one — a back-lit landscape with sheer curtains over the scene. I only find this out later but she knows right away that it is not a window.

We unpack and discuss where we’ll eat dinner. I have chosen a steak house, but remember she is currently vegetarian. We settle on Mexican and chat over a glass of wine for a few hours.

I ask her if she will wear a mask when we go out for dinner and she says “Sure.” I’m both surprised and relieved as much of our conversation since the beginning of the pandemic has been about her resistance to mask-wearing. She says, “I don’t mind wearing a mask, Mama. I just don’t want to wear one all day at work.” (She had been let go from her job for this reason.)

The Mexican restaurant is in the middle of a classic late 19th century downtown. The bank building looks like every bank building in a Western movie. There are four restaurants, three bars and three second-hand stores as well as a large lit up red, white and blue decorated Republican Party Headquarters, and a smaller Democratic Party Headquarters. When we walk into the restaurant, I have my woolly scarf covering my nose and mouth; Paige is holding hers in her hand. Everyone in the restaurant turns to stare at me. There are perhaps 60 people at long tables. Not a mask in the place. We are served big piles of Mexican food, more than we can possibly eat, and a “small” margarita large enough for three people. Paige says we won’t have to go out for dinner the next night as we’ll have plenty of leftovers.

Snow starts sometime during the night. Both my husband and my son-in-law text me in the morning to warn me not to try to drive home the following day if it is still snowing. I don’t know if I will be allowed to stay one more night at the BNB but decide I’ll deal with that when and if I have to.

The next morning Paige and I read and eat a leisurely breakfast at the BNB. She tells me her mattress is too hard. I volunteer to switch beds but she demurs. I have asked her to bring her fortune cards to read my fortune. These are different from tarot cards. I’ve watched her do readings with these cards and am more than a little curious about what she will make of mine, as I feel like I am in some kind of emotional transition.

After I shuffle the cards, she places them in three rows of three and does a credible job of explaining what the chosen cards might mean to/for me. In this configuration, the upper left card symbolizes me (The Cross). The middle card in the second row symbolizes the topic of the reading (The House). The lower right card represents the outcome of the reading (The Snake). Here is my hopelessly inadequate summary of the reading as follows: The Cross/Me symbolizes the need for spiritual renewal of some kind. This seems obvious to me given my ambivalence about almost everything currently in my life. Although I am not religious, I am very much drawn to ritual, insight, and other non-rational ways of knowing. The House is my ground/core, the way in which I will find renewal. Mostly, the house has felt like a prison for the last year or more. The Snake represents change, shedding my skin, entering a new phase of my life. God, I hope so.

Afterward, we hit the second-hand stores in town. We try on feather hats and buy 50% off Christmas ornaments. Walking back to our car, I fall on black ice, onto my back and head. Paige helps me get up onto my knees and then my feet. My head hurts. By the time we get back to our place there is perhaps a foot of snow added to what was there when we arrived and the snow shows no sign of letting up. I begin to wonder seriously about driving the next day. Paige wants to go to a pizza joint later. I say I can’t face going out in the snow again, as my head has just begun to stop throbbing. I’m too tired so we eat leftovers after all.

She figures out how to work the television from her phone. I’m amazed, having read the directions on a laminated card for guests and finding them incomprehensible. We watch Lost in Space and The Girl from Oslo. She asks why I like to watch violent programs at night like The Girl from Oslo. I say I guess I prefer them. Maybe the tension on the screen helps me to release my own tension. Paige suggests I might sleep better if I watched something more soothing. It’s not a bad idea. And yet, I sleep soundly.

The next morning dawns with clear, brilliant blue skies, sun sparkling on the new snow, and roads cleared. We tidy up, carry our bags to the outside door and prepare to leave before the 11AM deadline. Tom has just finished plowing the driveway again. Our cars have been shoveled out. Paige has a protracted chat with Tom about their house — when did they build it (about five years before), why did they choose the style (both had been interested in the Bauhaus artists and architects), how is it heated/cooled (solar). I stand on one foot and then the other as Paige satisfies her curiosity about our hosts. Also, her car blocks mine. Finally, she gives me a hug and says “Thanks for a no-drama visit Ma.” I’m taken aback. I hadn’t expected any drama, but perhaps that has been denial on my part.

On my two-hour drive back to Madison, I white-knuckle it for the first 50 miles, until I’m sure the road is clear and dry. Then I try to recall the four or five prior after-Christmas visits I have made to see Paige. I search my memory for drama. The first time I visited I stayed in a room off of the cabbage-smelling kitchen of a North Minneapolis widow who was anxious to socialize. I was not anxious to socialize with her. Paige got angry with me (I can’t remember why) and refused to see me for most of the two days I was there. I felt helpless and sad — there was definitely drama. Another time, my daughter Blake and I sat outside Paige’s apartment while she ran some “quick” errand that took at least an hour. We were cold and frustrated when she finally returned. More drama. Perhaps the lesson, I concluded, was to meet in neutral territory as we just had. I hope that Tom and Verona will welcome us again next year.

Sara Orem, Ph.D. is a longtime OLLI instructor, member and volunteer who facilitates workshops for older adults about vitality in the aging process. She also leads the Vital Aging Interest Group that is open to all OLLI members. Sara originally published this post on medium. It is republished here with her permission.