Letter from Ukraine: A Doctor's Perspective 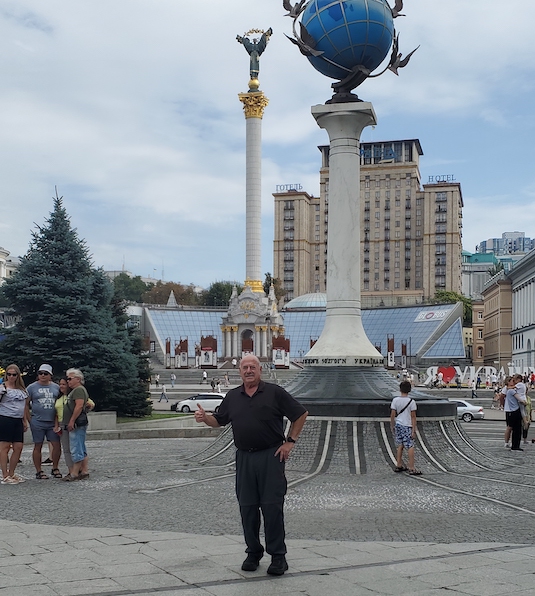 Dr. Michael Baker is an OLLI @Berkeley faculty member and retired trauma surgeon who also served 30 years in the uniform of his country, retiring from the U.S. Navy with the rank of rear admiral. He was awarded three Legion of Merit awards in addition to the Marine Corps Combat Action Ribbon. He sent us the following message and photo which we're sharing with you with his permission.

I am currently in the Ukrainian capital of Kyiv teaching Advanced Trauma Life Support (ATLS) to Ukrainian physicians. I am working on behalf of the International Medical Corps (IMC) which is an NGO focused on humanitarian activities.

The purpose of ATLS, as so eloquently stated in the Talmud: "... whoever saves one life saves the entire world "

We have another team here that is teaching a pre-hospital version to paramedics and EMTs.

Each session starts with a couple of lectures utilizing powerpoint slides and videos. Then we go to hands-on skill stations where we teach the students the crucial elements of securing a patient's airway, stopping bleeding, stabilizing fractures, et cetera.

We do simultaneous language interpretation at our lectures and skill stations. 12 hr days.

The air raid sirens sound almost every day to warn of incoming missiles. There has been no strike near where I am located. The Russian Army had advanced to approximately 20 km North of where I am located at this time. The Ukrainians are not Russians, they do not consider themselves part of Russia. They want to be a democratic government and connected to the European economy.

Most of the students speak some English and some are very fluent. Our interpreters are outstanding. All the students are extremely grateful for the information, and quite jazzed by the fact that America is their corner and that we are willing to come here to help personally.

It is overall a very beautiful country, with a very proud people, who are not going to back down from this inexplicable aggression. My friend who is embedded with and working in the Ukrainian military says they will beat the Russian army and will win.

When IMC reached out to see if I would come teach here, I felt there was no alternative. I had to do my part to defend this unwarranted attack on democracy in Ukraine.

Upon my return I will I will resume my fight for democratic institutions and the rule of law in our own country — which are sadly threatened from within at this time.