Faculty Q&A: Harry Chotiner on Finding Something of Value in Every Film

Home › Blog › Faculty Q&A: Harry Chotiner on Finding Something of Value in Every Film
Nancy Murr 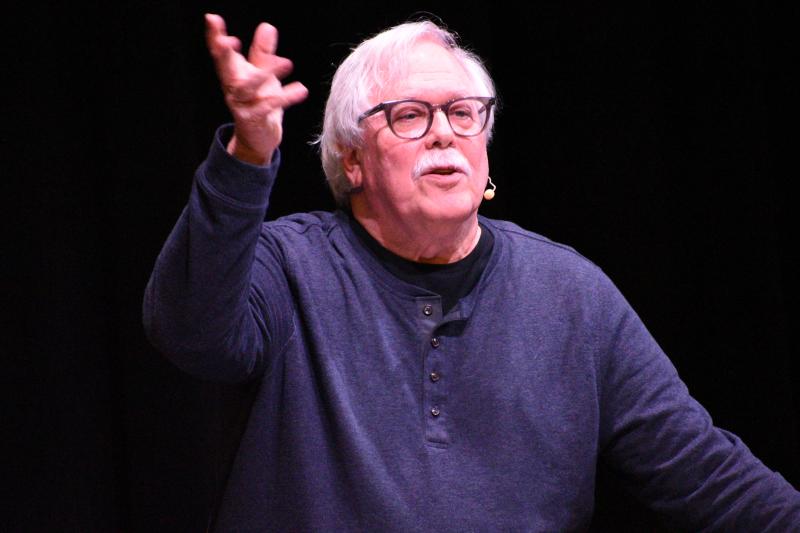 Harry Chotiner served as an editor at Socialist Review magazine, a reader at Zoetrope Studios, and a story editor at CBS. He also served as vice president of development at 20th Century Fox and Interscope Communications and has taught history and film courses at the school of professional studies at New York University. Harry is teaching "Diving into the Movies" with us this fall.

What are some of the first movies you remember loving?

As a kid, I remember being bowled over by Seven Brides for Seven Brothers. Those men were very robust. Their energy and vitality was all over the place, and I thought it was all pretty exciting. The other one was The Vikings with Kirk Douglas, Tony Curtis and Ernest Borgnine. That made a big impression on me, too. But can I tell you a quick story about my father and movies?

Everybody likes movie popcorn, right? So he and I would be walking down the street and when we would pass a theater, he’d walk into the lobby, no ticket, buy popcorn, walk out, and on we’d go, munching away.

So your love of films is wrapped up in the whole theater experience, popcorn included?

It is now, but not at the time, actually. I’m kind of embarrassed to say, my love of movies didn’t start in a theater, despite the delicious popcorn. If you grew up in LA like I did in the 50s, there were literally four local channels that played movies all night on Fridays and Saturdays. My sister and I, or my mother and I, would watch movies until 2 or 3 in the morning. That was my film education. I watched all the film noir, all the Capra, a lot of John Ford westerns, Casablanca. I saw movies over and over again. There we’d be, watching Mr. Deeds Goes to Town and eating my sister’s cinnamon toast at midnight. There was nothing better than that.

Are there movies that you used to adore that you’ve changed your opinion about, or vice versa?

On the first day, he hands me a script and says “do coverage of it for me, tell me what you think.” Needless to say, I spent that whole night going over it. I analyzed it in every which way. And I will immodestly tell you that my break down of it was great. The next morning, I left my write-up on his desk. He called me in a couple hours later and said, “I read your coverage. You're a college boy, aren't you?” I said, “Yeah, I went to college. So?” He said, “Here's what it means. College boys think that the more you tear something down, the smarter you are. And the smartest person is the one who can rip something to shreds. Let me tell you something: We get hundreds of scripts here. We all know that 99% of them are shit. I don't need people to tell me that. What I need you to do is to read every script and to find something of value. Maybe the writer has a great ear for dialogue, and we should think about that writer for rewrites. Maybe it's set in a place you’ve never seen a movie before. Maybe it's a drama, and it's turgid and terrible, but it would be funny if it was a comedy. Find something of value.”

That was incredibly helpful to me.

Maybe it’s a testimony to my stupidity, but I only love movies more, not less. Now, there have been incidents where I start to watch a movie, and then turn it off five minutes later because it’s not as good as I thought it would be. But if I’m channel surfing, and The Godfather is on, I'm there for the next two and a half hours. There are so many movies that I like more and more. Every time I watch them, I learn something new. That's my overwhelming experience.

The first question I bring to almost every film is will this be a good movie to teach? Unless I'm positive it won’t be — say, it's an action movie with Liam Neeson killing 38 guys while trying to rescue his daughter — I almost always have a pad of paper and a pen with me. I'll start taking notes about the flow, the structure. What makes you feel a certain way? Is it the editing, the music? I'm always examining the experience.

You have a huge OLLI fan base. At the risk of forcing you to be immodest, what do you think is the magic that makes your course so popular?

The two best compliments I ever get as a teacher is, one, “now when I go to the movies, I look for things that I didn't look for before. And so it's much more fun.” The second is “when I saw this movie, I thought, ‘What the hell was he thinking? I am never going to get back these two hours. Why would he have assigned this movie?’ and then at the end of the discussion, they go, ‘I'm so glad I saw this thing.’”

Honestly, the class isn’t about me, it’s about the members. One of the best things about teaching older students as opposed to teenagers is that, generally, older people are open to letting go of their initial judgment.

I think life experience teaches us how many things we were wrong about. There's a humility that tells us that maybe we don't know everything, and that maybe there's more to something than we originally thought.