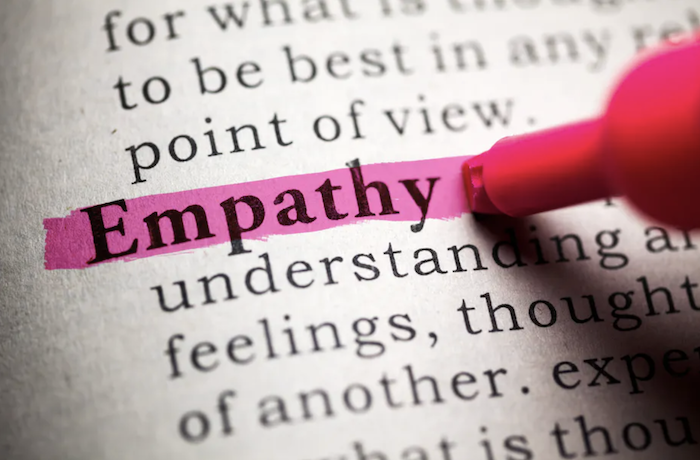 Let’s start with the definition of the title of this essay: Empathy. Empathy is “a person’s ability to identify with or experience the feelings, thoughts, or attitudes of another.” If one word alone could distinguish the divide that exists between people today, it would be the degree to which one does or does not experience empathy for their fellow human beings.

An example of someone we might all agree as having empathy would be Mother Teresa, known for her selfless devotion to her fellow human beings whom she saw as suffering a wide range of deprivations. On the other side of the ledger, one might identify people today which would include autocrats and other national leaders, who lack empathy and are primarily self-serving and narcissistic.

Psychiatrists posit that individuals with overly severe and punitive childhoods often develop a lack of empathy. A book by German psychoanalyst Alice Miller titled For Your Own Good: Hidden Cruelty in Child-Rearing and the Roots of Violence (1980) examines the long-term consequences of past abusive child-rearing tactics in Germany.  And the severe childhoods of German children at the turn of the 20th century is also depicted in the movie The White Ribbon (2009).

After reading the above noted book, I corresponded with the late Nobel Laureate and Holocaust Scholar Elie Wiesel, who agreed that this book makes a powerful argument for why Nazism in Germany evolved into a political force that included the extermination of Jews and other minorities. Germany was a highly educated society then, and Berlin alone had 9 symphonic orchestras at the time Nazism evolved. Thus, something other than the lack of education or culture had to exist in Germany to explain such inhumane practices, and the book’s and movie’s descriptions of overly severe and abusive childrearing tactics help explain these inhumane behaviors emanating from mature adults.

The practice of slavery in America began in 1619 and the residues of that persist to this day, although it was formally abolished in 1863 under the leadership of Abraham Lincoln. In an OLLI class I took earlier this year on Lincoln, the point was made by our teacher Michael Chantler, that what separated Lincoln from other politicians at that time was his extreme empathy. Lincoln was not a person who saw all races as equal as much as he was someone who saw slavery as inhumane, and thus sought to eliminate it as a result of his extreme empathy for his fellow human beings who suffered from enslavement.

There is no way to legislate that our leaders must be people with high degrees of empathy, but it is important for people to understand the importance of this quality when deciding whom to vote for. Germany discovered this the hard way in the last century, and other countries are experiencing the negative impact of this today when their leaders are overly self-serving, narcissistic, and lacking in empathy.

There is famous quote from Wiesel: “the opposite of love is not hate, it’s indifference.”

Take notice, America: our shared futures depend on understanding this.