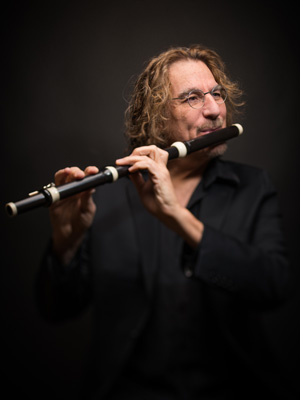 It was partly my affinity for Baroque music, but also an affinity for the instrument itself. I first heard a recording of a Baroque flute on an LP in about 1970, and I fell in love with the sound of a wooden flute. I did some research on it — I was already playing a regular flute at the time — and gradually moved over to the Baroque flute because I loved the sonority and feel of a wooden instrument.

Your performance career has tended to focus on Baroque music. What had you choose Gustav Mahler for your first class with OLLI?

I got turned on to Mahler as a composer during my freshman year of college. I was attracted to the way he uses the orchestra — he was also a conductor — and the spiritual and philosophical journey of his eleven symphonies. When I started at Carnegie Mellon University about 15 years ago, I was hired to teach Baroque music but my department head asked me what else I would like to teach. I mentioned the Beatles and Mahler. They couldn’t be more different — from Baroque music or from each other — but the Beatles and Mahler both make very good music, and I enjoy the variety of teaching such different genres.

Describe a few aspects of Mahler’s symphonies that might not be apparent to the casual listener, but that your class will help shed light on.

Mahler has a message behind each of his symphonies. Sometimes that message is obvious because he spells it out for us, but sometimes not. We’ll do an investigation of the meaning behind each of Mahler’s symphonies. They’re all autobiographical in one way or another: he puts his life and all of his struggles into his music, and it’s a fascinating journey to follow.

For instance, Mahler’s Symphony No. 2, the Resurrection Symphony, is a five-movement symphony exploring the questions of why we live and why we die. Later, Mahler’s “Song of the Earth” was written after his Eighth Symphony, but he didn’t call it his Ninth Symphony because he was superstitious: Beethoven died after his Ninth Symphony, and Bruckner died while composing his Ninth. The “Song of the Earth” explores these same themes of life and death through medieval Chinese Buddhist poems; it’s a very different meditation from the Christian themes of his earlier work. It was also written after three personal tragedies: the death of his daughter, his being diagnosed with a serious heart condition, and being forced to resign from his job as director of the Vienna State Opera.

At the time he wrote “Song of the Earth” he knew he didn’t have long to live, so he’s looking at life and death through a very different lens.

I should also add that people shouldn’t be scared to sign up for this class. I’m always happy to have musicians in the room, of course, but the class is designed for non-musicians. So nobody should worry about not having enough musical knowledge. During the first class meeting I’ll poll students, and then adapt the class accordingly.

You have over 30 years’ teaching experience. How does your career as an academic influence your work as a performer, and vice versa?

In the classes that I teach at Carnegie Mellon, I’m able to offer my students my perspective as a conductor and performer. They’re training for a career as classical musicians — trying to make a living from it — and I can share what I have learned from all my years in the trenches.