Rose Kelly is a professional artist, avid traveler, and textile collector, with a special interest in the protective symbolism of traditional textiles. She is a lecturer in the Design Department at her alma mater, UC Davis, and holds a master’s in museum studies from John F. Kennedy University with a specialization in education and interpretation. 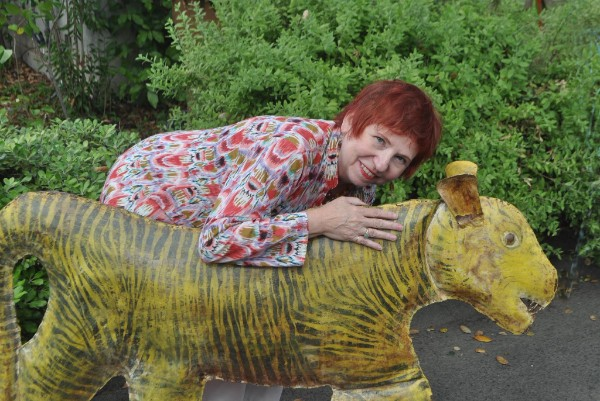 What drew you to this topic? Did your textiles grow out of a love of travel, or did they go hand in hand?

I think they went hand in hand. I have always been fascinated by things from foreign lands. We used to go to the de Young: back in the day it was free, and we would go most weekends and see the mummies and they had that big courtyard at the old de Young with the carpets and it all just seemed so exotic. And then after my junior year in college I went to study backstrap weaving in Guatemala and that was the first time I had been out of the state of California. When I grew up my mother sewed all the time, so I was always around fabrics and I think I have always been interested in textiles.

I later went on to get a degree from John F. Kennedy University in museum studies. I worked as a curator at the National Institute of Art and Disabilities in Richmond. It’s an art program for adults with developmental disabilities, and I had the opportunity to travel around a little with that. I went with the founder to Japan, and we did a nine-city tour in 11 days. He was in his late 80s, and I was still jet-lagged halfway through while he was like “Come on, let’s go!” we gotta get going!”

What are some of the countries that you have visited and brought back textiles from?

I think that trip sort of started my shift to Asia: I went to Japan, Laos, Vietnam, Thailand, Indonesia, Burma, and Bhutan. I’ve also been to North Africa, and of course Latin America: traveling to Guatemala really sealed my interest in this one technique called supplemental warp and supplemental weft. They also use that a lot in Laos. So that’s the kind of weaving that I learned in Guatemala when I was about 20. That summer I wove a section that was maybe three inches long, and the weaver — who was very famous — had a couple of assistants who were probably 16 years old, and they were really worried because, you know, you had to be able to weave to get a husband and I was struggling along with this incredibly complicated system of weaving.

What do we learn about a culture from its textiles that we wouldn’t necessarily learn from other sources?

You learn about cultural id 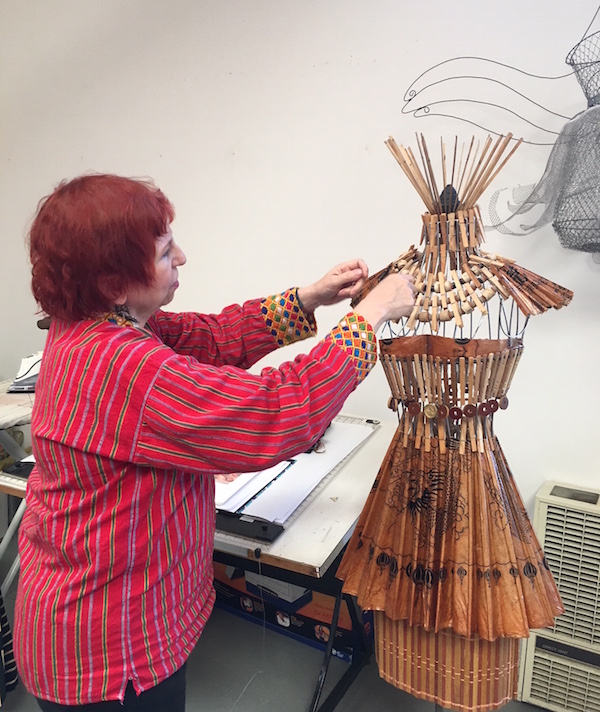 entity, you learn about people’s status in their society, you learn about the symbols — especially protective ones. They’re all embedded in the textiles. And they can be a little bit hidden: for example in Laos, because it was the center of a war for so long, a lot of the symbolism has been lost. And a lot of traditional techniques were sort of right on the edge, but now there has been a revival of the textiles in Laos. There’s just so much to learn.

Could you describe a favorite piece from your collection and the story behind it?

We went to Burma when things were looking more positive — Aung Sun Suu Kyi was not under house arrest — so we went with an Australian friend who has a travel agency and was organizing trips to Burma. And the one thing I wanted: I had seen one of these talismanic undershirts at a show years ago, and they’re covered with protective symbols. It grew out of symbols that were used in tattoos, but the idea was that if you wore one of these protective shirts when you went into battle, you wouldn’t be killed because you would be protected. So I thought “That’s the one thing I want to bring back from Burma.” And we traveled all over Burma, and the last day we went into a little shop in the capitol, way in the back of this marketplace, and there was one of the shirts. And they’re very rare, because it’s not really done any more. Mine’s pretty worn, so you can tell that someone wore it quite a bit.

Your course description mentions the economic role of textiles. Could you elaborate a little bit on that?

For women, often the only income that they can have is through making textiles. Although it’s interesting: when you look at the role of textiles around the world, a lot of the time once machinery comes in — floor looms — then it shifts and them men suddenly are making the textiles while the women do the preparation. Also, when you travel it’s often one of the few ways to actually meet women in a lot of cultures: the women are out selling their textiles when the rest of the time they would be at home. So it’s a nice way to interact. And these days a lot of aid groups are using this as a way to help empower women: by supporting their efforts to create a product that’s sellable that will have usually an international audience.

You’re also a practicing artist. Tell us more about that.

So I work in textiles and found objects, and sometimes they intersect. My background is in making textiles. Here’s a piece that I just finished: it started out as samurai armor, and then it changed to be more of a wind goddess. I had all these clothespins from the neighborhood 99-cent store, and I got these placemats at a sale in the City, and my husband brought home a broken chinese parasol, and they all fit perfectly together. In Bhutan, there are all these deities of the winds and deities of the directions, so it went from being a samurai to being a wind goddess.