Rob Merker received his Ph.D. in philosophy in 2012 from the City University of New York (CUNY) Graduate Center after retiring from a successful business career. He has been an adjunct professor at Brooklyn College and at CSU East Bay. His teaching goal is to make philosophical ideas interesting and accessible to everyone. 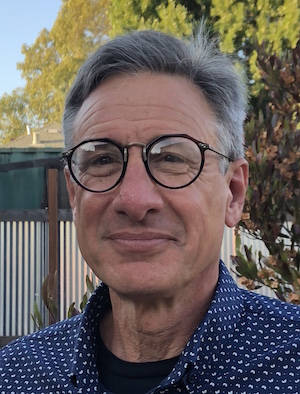 Your previous career was in real estate investment. You then earned a Ph.D. in philosophy and went on to teach at Brooklyn College and Cal State East Bay. Tell us more about that career change.

My experience is very much in line with OLLI’s mandate and goal: I pursued my doctorate purely for the love of learning. I had my own business, things were going well, and I was looking at retiring early. Because I worked for myself, I had the ability to ramp down, which made it quite a bit easier. I started my doctorate at the City University of New York in 2001, and I didn’t finish until 2012. For many of those years I was working full-time or almost full-time, and then after I moved out here [to California] and became more fully retired I wrote my dissertation.

To give a bit more background: when I graduated from high school in the 1970s I was not into going to college; I was into being a hippie. So despite having the grades for college and parents who were willing to pay for it, I went out and lived as a hippie. I lived in a teepee for a while, and eventually I realized I had to get a job, so I wound up going to a technical school and learning to be a computer programmer, which I did for about 10 years. Then I moved back to New York to start a business, and it really began to bother me that I had never gotten a degree. Do you remember the old slogan “a mind is a terrible thing to waste”? That slogan used to eat at me. So I went back and got an undergraduate degree through the State University of New York, and then I pretty much immediately enrolled in grad school.

The next question you might ask is: so you wanted to go back and get a doctorate, but why philosophy? And to me the answer to that question is very important. I think that the most fundamental questions are in philosophy. No matter what the discipline, there’s a sense in which if you don’t answer the philosophical questions first you might be working under false assumptions that you haven’t rigorously examined.

I don’t really think of philosophy as a career; I’m mainly retired. In addition to teaching, I do volunteer work. I’m on the ethics committee at Kaiser hospital and I’m also on ethics committees both at Cal and at the Lawrence Berkeley Labs which ensure human subjects are treated ethically in all research.

From your syllabus, it seems like you’re approaching philosophy less as an abstract speculation on arcane topics and more from the ars vivendi and ars moriendi [art of living and art of dying] traditions. Would that be accurate?

There’s a lot in philosophy that’s very arcane, but that interests me less. I’m interested in applied philosophy. My course is structured as an intro to philosophy, but taking out stuff that I don’t think is interesting to an audience my age and tailoring the rest in a way that it applies to people’s lives. I mean, I’m interested in whether this table is really here and it’s fascinating stuff, but I’m more interested in how these important topics really apply to daily life. For instance, one of the things I’m pretty involved with is the end-of-life movement. I’m a volunteer with Compassionate Choices, which is the main organization that pushed through the California end-of-life law. And end-of-life questions are the kind of thing that philosophers have a lot to say about. As a matter of fact, if you want to find the best arguments about these questions, don’t turn on the TV and don’t go to the popular press; go read the philosophy.

Let’s expand on that for a moment. Can you give a couple of examples of how philosophy could be a compass for tough decisions?

It would be hard to give a quick answer… but let’s take the end-of-life issue. What we want to do in this course is think about a question and say “when the smartest people around thought about these questions, what ideas did they come up with?" So we would take something like the end of life, and look at some of the issues of moral philosophy — which is the underlying theory that answers ethical questions — and then look at the works of thinkers like Immanuel Kant and John Stuart Mill, and then and we’ll try to apply it all practically.

I have to ask you about another example from your syllabus: what are the ethics of self-driving cars?

Self-driving cars can think about things a lot more quickly than we can. So let’s say you’re driving down the street and all of a sudden there’s an obstacle straight ahead of you, with an old person to the left of it and a young person to the right. If you hit the obstacle you will die… so do you go right, left, or straight ahead? If you or I were faced with a situation like that, we would just have to react. But, if you knew ahead of time you would be faced with this dilemma, you might be able to think your way through, and you might think that you would hit the old person because they have already lived most of their life whereas a young person still has most of their life ahead of them. In reality we wouldn’t do that; we would just react. But a self-driving car, because it’s a computer, can run any program that you’ve programmed into it and make calculations in a quarter-second. We’re not there yet, but in the future the car may be able to evaluate who both individuals are and make a decision. If one of the pedestrians is a crook, it’s an easier decision, right? That’s what the ethics of self-driving cars are: If someone’s going to get hurt, who will it be? Will the car save the driver, or save pedestrians? Because we have the opportunity to stop and think about it, the people who design these vehicles cannot ignore these questions. They can’t get away with saying “well we just hope for the best” because they have the ability to program these decisions. Obviously I’m not the only one talking about this; everyone knows that this is going to be an issue.

Your course will also examine notions of truth in the specific context of contemporary politics and journalism. In that context, what would Jacques Derrida have to say about Rudy Giuliani’s recent assertion that “truth isn’t truth”?

Derrida might say we all have our own truth, that truth is a subjective construct, so he might not be troubled by Rudy’s statement. It was an idiotic statement. All he was trying to say is that there are two sides to every story and that this is a “he said – he said” controversy. Of course there is one “true” thing that happened. The statement “Trump asked Comey to go easy on Flynn” is either true or false. But there actually are interesting arguments against truth being truth, and if we have time we will go into those and talk about why those arguments can be made.

I also want to spend a little time on arguments and argument fallacies. When you watch the news on TV, what you’re really seeing is a series of arguments back and forth. And a philosophy course will explain classic rhetorical fallacies: the straw man fallacy, the ad hominem attack, etc. and we can go through news clips and tweets to identify these argumentative fallacies.