Richard Saiz is a documentary director and media veteran. He has won several awards, including the DuPont-Columbia and Best Documentary from the San Francisco Film Festival. He has conducted workshops in the United States, Cuba, and Brazil. As a programming manager for the Independent Television Service, he worked with directors and writers in developing fiction films for public television. 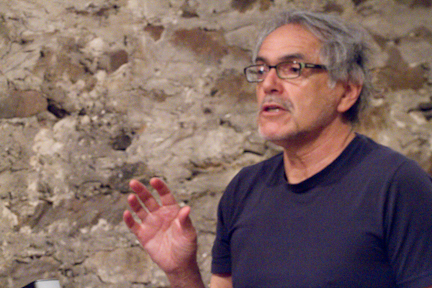 How did you get interested in making documentary films?

The idea of informing people was something that really excited me. As a kid, I even published my own newspaper. I was fascinated by television journalism, and grew up with the big anchors like Walter Cronkite, Huntley and Brinkley and those people. While I appreciated the importance of daily news, I was really more interested in documentary film because I felt that was the one way to dig into a subject and really lay out its story. That was always my first love, and I got a chance to do that at KPIX in San Francisco, where I became the head of the documentary unit. When they shut down the unit, I began working for the Independent Television Service (ITVS). During my time at ITVS I must have reviewed over 1,000 films and had a hand in supporting many excellent documentaries.

What was the most exciting project that you worked on in either of those roles?

One of the highlights at KPIX was producing a documentary about the California Youth Authority (CYA), which is basically a prison system for juveniles. This story was triggered by the fact the referrals to the CYA really spiked during the 80s. I wanted to investigate and ended up doing a long term documentary that followed four young boys over a four-year period and observed what happened to them in the system. It was pretty dramatic and really tragic, as you can imagine. That documentary received the Columbia Dupont for Best Local Documentary. That was obviously a career highlight.

What was one story that you hoped to materialize but that never got told?

(Laughs) Well, the truth is that filmmakers don’t like to talk about that! I can tell you one funny story though. Many years ago I got a call from a reporter from the New York Times, and they were doing a story about this very phenomenon. This reporter wanted me to help him identify filmmakers who could share their stories about the ones that never got made. I couldn’t find anybody, but I had raised money for and shot a documentary that had never gotten made. The irony is that he ended up profiling me in this New York Times article! So my claim to fame as a documentary maker is the one that got away.

What was that story?

It was the story of a woman that I worked with at KPIX, Janna. She was disabled and had a very severe form of arthritis. But she was so dynamic that she basically made you forget she was in a wheelchair. Anyway, one day she came up to me and said that she was going to move to Ireland. She had been living in Berkeley, the mecca for disabled people and disabled people’s rights, but she was moving to a country, as charming as it is, that was way behind on that front. I wondered how she was going to do it and asked if she minded if we document it. So she moved all the way to Ireland, and, before our eyes, became prominent in Ireland’s disability rights movement, leading demonstrations and even meeting the president! It was a remarkable change.

You most recently taught an OLLI course called “Before Sundance” that looked beyond mainstream Hollywood. Why is it important to look outside the establishment?

At ITVS, most of our work involved documentaries, but we also worked with emergent directors in narrative film. Today, independent films are the ones that are really developing the art of film-making because independent directors tend to take more chances. They are trying to tell stories that break the rules. They take on subjects that are taboo or that are controversial. Just think about Moonlight, which won the Oscar for Best Picture. Barry Jenkins made a small, relatively low budget film dealing with black experience from a very different or unusual angle, the issue of sexuality among young black males. If you pitched that idea to a studio head they'd say, “Are you out of your mind?” But that is the beauty of independent film. This is a story that is part of the American experience and that needed to be told.

Your current class is called, "Essential Films for our Times." How did you decide on these films?

Like many people, I am really caught up with what is going on right now in our political culture. I wondered what I could do to offer a different perspective. I think that movies can provide that because movies are a window into American society. Is it a realistic picture? Sometimes it is, sometimes it is mythologized; but it is still a reflection of the mood of the country and what was going on at any particular point in our history. I wondered if I could develop a course using movies to examine where we have been and how we got to where we are today.

I decided to look at particular themes to help us understand what the country was at different points in its history, and how we have come to our current situation. Movies reflect society’s beliefs in a political way—something like the American Ideology. American Ideology deals with things like capitalism, individualism, meritocracy, American exceptionalism, etc. These core beliefs have driven people and the American imagination but have also driven politics and political discourse. This ideology has played out again and again in movies throughout history. Comparing them can be instructive. And movies are the most democratic art form that we have.

Would All Quiet on the Western Front, one of the films you have selected for the course, exemplify this?

All Quiet on the Western Front is a very interesting film. It reinforces the notion that, ultimately, war comes at a huge price and often doesn’t achieve what it is supposed to achieve. It is a breakdown in civilization and a tragic error, and Americans at that time just didn’t want anything to do with it. That was 1930. Within fifteen years, everything changed dramatically, because of WWII. After that, movies began reflecting a very different kind of message. It wasn’t pacifist. It wasn’t isolationist. It was: “We need to go and fight!” In Casablanca, one of the great classics of all time, the main character reflects this American attitude. He doesn’t want to get involved with the refugees, and doesn’t want to get involved with what is happening in Europe. But Casablanca has a pro-war, pro-involvement political message, which offers a warning as to what could happen if America did not get involved. No matter how strongly filmmakers feel about these ideas, they don’t want to create films that are too literal and didactic because they know that audiences will get turned off. They have to figure out ways to tell stories that are dramatic and compelling and appealing and that also have something to say. And the fact is, Hollywood has been doing this all along!

You pair All Quiet on the Western Front with American Sniper. Why did you choose that film?

After All Quiet on the Western Front, Hollywood took a very different stance. The U.S. military became a major part of the government budget. It is interesting for people to note how we went from a pacifist, isolationist stance to the biggest military force in the world in modern times. American Sniper brings us full circle, because American Sniper is very nuanced. Depending on who watches it, people take away different things. Some people think it is pro-war; some think it is anti-war! And so American Sniper ultimately ends up being a film that is ambivalent about war, and it’s a tragic story. Another interesting thing about American Sniper is that it is the highest grossing war movie ever in Hollywood history! And you have to ask, “Why?”

The beauty of movies is when you start examining them, breaking them down and asking questions of them. They stimulate a discussion that goes beyond the movie itself and expands into American society. Movies are good ways to get into discussions about politics and social issues and other things we are confronting as a country. (Pauses) But, it’s all in fun!