Michael Socrates Moran is the founder and artistic director of the Ubuntu Theater Project. He is an award-winning director and actor, having directed over 20 classics and world premieres. He has acted professionally in Boston, New York, and Chicago, and holds an M.F.A. in directing from UCSD. 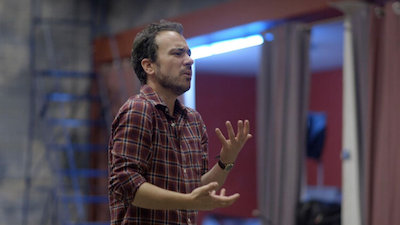 The title of your course is "Why Shakespeare Matters Today" which, of course, leads me to ask, why does Shakespeare matter today?

I think that Shakespeare's work, and particularly some of the plays that we'll be looking at, speaks to something eternal in the human condition, and how that manifests in society and politics, love and relationships, power and loss and grief. Looking at those plays and that eternal human condition in the context of the world we're living in now can reveal something underneath the surface, which I find incredibly enlivening and exciting. The paradoxes that Shakespeare's plays put forward are often resonant with the paradoxes we're all facing in the moment we're living in.

Why have you chosen Hamlet, Coriolanus and King Lear to showcase?

If I had millions of dollars and got to produce three Shakespeare plays, these would probably be the three that I would pick right now, because each of them speaks to something happening in America in this moment, refracting and reflecting the current world, but in different ways. There are particular lines and scenes, which we may all have perceived differently at an earlier point in our lives and now you wouldn’t quite hear the same way. For instance, there's the "a plague on both your houses,” the famous line in Romeo and Juliet.

The plague was a fairly common occurrence in Shakespeare's time and you can really see how it affected how and what he wrote. His relationship to death was probably different than our relationship to death and that manifests in these plays, not only in the realm of mortality, but also in the realm of order and disorder. One of the things that happens in a time of plague is that the order gets disordered and different things become possible and different things fall apart and there is a constant striving for renewal. I believe Coriolanus and King Lear were both written during plagues, and Hamlet, of course, was written right after he lost his son named Hamnet.

There’s also a major theme in Hamlet that I want to explore, which is poison — poison of society and the attempt to unearth it and the revelations surrounding it. Apocalypse means to unveil the curtain and Hamlet, you could argue, is all about that — a sort of revelation, of getting underneath and extracting what's behind the curtain. And then you can see, of course, all of the corruption and rot underneath — “something is rotten in the state of Denmark” — that's coming to the surface. And that is very applicable right now.

How do you approach the works in class?

I tell the class at the very beginning that my way into the work is primarily as an artist, not an academic. I look at the work as a director would look at a play, which largely focuses on the question: What does this play have to say to us now? How would this play yield certain revelations? How would we tackle that text now? I try to illuminate different choices in a production, in Hamlet say, that a director has to make and how those choices might reflect the world we're living in. By addressing it that way, it illuminates the revelations and paradoxes we encounter in the world around us. I take apart different moments, different acts and talk about it. What is complex is that on some level, you have to understand the foundational layer of the play in order to then get to the interpretation of the play — or what I would call the “interrogation” of the play so that it can live very presently, very bracingly for us right now.

For members who may have last read Shakespeare in high school, do they need to do anything to catch up prior to the start of class?

Honestly I don't think they need to do at all. I hope that the course sort of innately does two things. One, it speaks to the people who know these plays in their bones. The other is it will inspire people who always felt like these texts were kind of dry and dead and old. I think the way to do both of those things at once is to talk about and try to reveal how these plays speak to our exact current moment and the human struggle that we're all facing inside of this moment. I see them as a way to inspire a kind of inner life in us.

What do you hope members will take away from your class?

I think that’s a great question and it sort of gets to this larger question for me about "why theater, ever?" At its core, one of the things I worry about among the thousands of things going on in the world is that as a culture we deplete ourselves of our inner life and being connected to our inner life. And I think that really resonant art reconnects you to that sense of being alive inside. I hope that in this class, my own passion for why theater matters, and why Shakespeare matters today, might help inspire that part of people that feels excited about reconnecting to the parts of life are unquantifiable, that resonate inside.

As the founder and artistic director of a theater company, what do you hope will happen to theater on the other side of this crisis?