Dr. Margaret Race, an ecologist and graduate of UC Berkeley, works with NASA and the SETI Institute on research in astrobiology and environmental policy. Her focus is on planetary protection, which seeks to avoid cross- contamination of planets during space missions. Just as on Earth, it’s important to avoid the introduction of invasive species…ensuring that space missions do not inadvertently bring terrestrial hitch-hiker microbes to other planets, and vice versa. 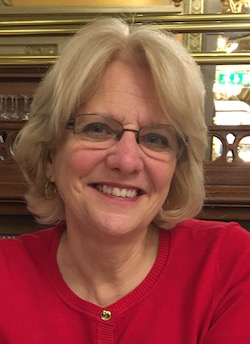 Could you give a brief overview of the field of astrobiology? What does it involve, and when did it come into being?

Astrobiology as an organized field came into being as a result of a NASA workshop in 1998. Participants discussed the interdisciplinary questions involved in understanding our place in the universe… especially in seeking life beyond Earth and understanding diverse environments in the solar system and beyond. The workshop developed a framework and roadmap for the types of questions that scientists were asking: How did life begin and develop? Does life exist elsewhere in the universe? What is the future of life on Earth and beyond? And how can we bring together diverse disciplines like chemistry, biology, physics, geology, astronomy, and others to study these complex questions? Just like research on Earth, astrobiology must ensure that its practices and protocols maintain the integrity of science data and result in responsible exploration. As we learn more about distant planetary locations and seek evidence of life beyond Earth, we are mindful of biosafety protocols, research transparency, and the need to update applicable regulatory policies, both on Earth and beyond. Without a doubt, this means working on some unusual science policy questions.

What does the study of life on Earth teach us about the potential for life on other planets?

There are a number of analogous situations between life on Earth and the potential for life elsewhere. For my doctoral research in biology at UC Berkeley, I undertook an ecological study of mud snails in San Francisco Bay. One species was an introduced species, brought to the Bay Area by what was at the time an emerging technology — the Transcontinental Railroad. The hitchhiker snails arrived in barrels with east coast oysters — and soon spread throughout the Bay ecosystem, encountering new food sources, predators, parasites and diverse environmental conditions. As a result, the native California mud snails were displaced from their habitats — resulting in marked changes to the surrounding ecosystem.

Later, I was working at Cal when a UC researcher proposed the first-ever deliberate release of a genetically modified organism — a laboratory-produced microbe— not found in the wild. Of course, the environmental impact statement raised assorted questions about how the university planned to handle a lab-designed organism that had never before been released to the natural environment.

What if something went wrong? Could there be an impact on agriculture or commerce? What agencies and laws would be involved in overseeing the project?

NASA and other space agencies propose bringing back samples to Earth from Mars someday, the returning materials will need to be handled and studied in strict containment in order to avoid any adverse effects from possible martian hitchhiker materials or microbes — should there be any.

The exploration of Earth and its extreme environments has repeatedly surprised us in unexpected ways — like the discoveries of diverse organisms living in perpetual darkness near deep sea vents, to the teeming microbial communities that thrive in acid waters, boiling hot springs or under ice covers in Antarctica. We have found life everywhere we have looked for it on Earth, even in the most extreme and inhospitable environments. So what will we find looking beyond Earth?

The NASA website mentions ethical concerns in the field of astrobiology. Could you give an overview of what those might be?

In addition to following appropriate science policies and regulations— there is an interesting turn with astrobiology — because we may find life as we don’t know it. What regulations would apply if Martian life is shown to be unrelated to life on Earth? Some ethicists have suggested that this would raise questions about how to treat potential martian life. Even the famous scientist Carl Sagan once asked “Would Mars ‘belong’ to Martians, even if they are only microbes?”

Astrobiology also raises questions that are as much philosophical as scientific. What is life, for instance?

We don’t have a formal definition for life. It’s similar to defining water before the definition was standardized as two hydrogen atoms and an oxygen atom: we knew it was liquid, we knew its freezing temperature and boiling point, but we didn’t know what it was made out of. A virus has DNA, but it can’t replicate without its host organism. Is it life? Similar challenges might apply if we find ET life!

As we find out new things in biology, they also raise new questions. We now know, for example, about the human microbiome, which means that humans cannot travel into space without bringing symbiotic microbes. How might this affect life or environments on other planets we might travel to? What responsibilities does this entail? What are the legal dimensions to these quasi-ethical questions. How would one balance public safety against personal liberty in cases of enforced quarantine for an astronaut returning someday from Mars? The list of societal questions is as fun to contemplate as the scientific ones!

You are listed on the NASA website as a Solar System Ambassador, which is an exceptionally cool job title. What does it entail?

There are many people within NASA who are Solar System Ambassadors — who do extensive volunteer work, sharing the excitement of their work in STEM fields with others beyond their academic and governmental domains. All during my career, I have done science enrichment presentations in schools, libraries, museums and to public audiences. I especially like talking to middle and high-school students and educated adults. They’re quick to understand how astrobiology brings together a number of different disciplines: not only biology, chemistry, geology, engineering and astronomy, but also law, communications, public policy, ethics, social studies, and so on. I’m always impressed at the questions that students and adults ask — they’re typically the same questions raised by NASA scientists or JPL engineers. They just don’t know how to put their questions into a formula!