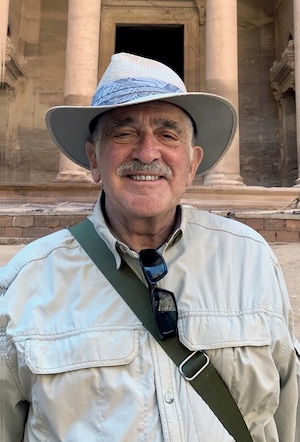 Ken Verosub is distinguished professor emeritus in the Department of Earth and Planetary Sciences at UC Davis. His interests range from understanding the Earth’s magnetic field to deciphering the Earth’s climate. Currently, he is studying the interface between geologic processes and human activity.

I’ve always considered myself someone who can communicate science in a way that makes it make sense. What I’m going to do in this course is take one topic each week — for example, sea level rise or extreme climate events — and explain what’s going on in a straightforward way. I’ll discuss the topics on individual levels, but also explain how they’re all interconnected. I tend to look at the big picture and try to put the pieces together in a way that makes sense.

I also want people to have a factual understanding of what's really going on and to be a little more skeptical about claims of absolute solutions to global warming, such as, oh, let’s just inject sulfur into the atmosphere. There isn’t a magic bullet that will mitigate what’s already happened or get us back to where things were before. But it’s not all doom.

Big picture is good. There are so many factoids out there it can be hard to make sense of all the information.

Exactly. The media doesn’t help. You read a story that the North Atlantic ocean circulation is going to shut down and that we're all going to freeze and we're all going to die. Or, that something is worse than it's ever been before. And to some extent, that is true, but you have to take each of these individual elements, and build them into a larger structure. Along with doing that, I’ll discuss ways to get involved or be more involved, and what that actually looks like. A review of what, realistically, you can do and what you can’t do.

A recent UN report states that many of the impacts of climate change are irreversible. Any advice for people who feel despair?

One thing I’d say is that human beings are the most adaptive creatures that have ever lived on this planet. No matter what happens, I believe many people will survive. We might not like how we have to live, but we will survive.

I guess that’s some solace.

Things are bad, but they're not that bad.

Of all the looming issues we're facing, is there one you’re particularly focused on?

I'm pretty fired up about all this stuff. For better or for worse, I am interested in everything.

Your field is geology, right?

Well, yes and no. I have a PhD in physics from Stanford. But while I was a grad student there, I became interested in geophysics, which is using physics to study the earth. After graduating, I ended up teaching at Amherst College with a joint appointment, eventually, in geology and physics. Then I got an NSF grant from the geophysics program, which put the stamp of approval on me, I guess. I then applied to Davis for a position in geophysics, so that's how I got here.

Most of my early work has involved studying the magnetic properties of rocks and soils and sediments. I was one of the people who developed the field of environmental magnetism. However, when I got to Davis, the first course I was given was geologic hazards, about which I knew not too much. I taught that course for a long time and learned a lot about hazards in the process — not simply the geology of the hazards, but the human aspects of the hazards, and that got me started in focusing on geologic impacts on people and societies.

There must have been a flaw in my graduate education, because nobody told me that I had to work on the same thing for the rest of my life. So I’ve taught courses in basic geology, environmental geology, non-renewable natural resources, the solar system, and energy and the environment. As time went on, I got more and more interested in these more general, more societal aspects of the field. I’m interested in earthquakes and earthquake preparedness, volcanic eruptions that have caused global cooling, and wine and geology. If you have an hour I can give you a lecture on the Napa Valley. I’m also fascinated by transboundary water disputes. There’s always something new to learn.

And as a result of my interests, I spent a year in Washington, D.C., in the State Department, serving as a Jefferson Science Fellow, which is a joint program of the National Academy of Sciences and the State Department. Its purpose is to bring state of the art science to the formulation of US foreign policy. The joke among ex-Fellows is we're still trying to figure out how to do that. But it was an exciting and rewarding experience.