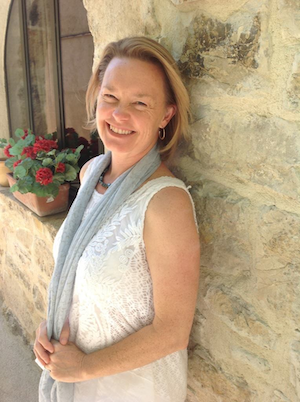 Kayleen Asbo, Ph.D., teaches at the San Francisco Conservatory and for the Osher Lifelong Learning Institutes at UC Berkeley and Dominican University, and she is the Artistic Director for Mythica, an educational organization that conducts international pilgrimages. She holds a Ph.D. in mythology as well as Master's degrees in music, psychology, and mythology; all of her courses reflect this cross-disciplinary background.

You have degrees in quite a number of fields. What discipline did you start with, and how did it lead you to the others?

My first focus was music. I was a child pianist: I started soloing with orchestras at the age of 12, and wanted to be a concert pianist. But I had a serious accident at age 18 and was told I would never play again. So I turned to my other loves, English literature and psychology. I studied those at Smith College and Mills College, along with a minor in women's studies.

I was on track towards a career in developmental psychology when -- at the Mendocino Music Festival, of all places -- I had a moment of realization that I absolutely needed to bring music back into my life. So I bought an upright piano, even though I hadn't touched a keyboard in years, and dove back into it. I enrolled at the San Francisco Conservatory of Music studying piano and harpsichord and earning a master's degree. By now, I have been teaching there 18 years: I teach graduate music students how to teach, since there's such a difference between performance and teaching and performers rarely have the psychological acumen or skills to be an effective teacher.

I also continued to pursue my other interests, and collected a few other degrees along the way. I have an M.A. in psychology with an emphasis on expressive arts therapies, and an M.A. and Ph.D. in mythology and I have done a great deal of study in art history and comparative religion. My greatest passion is weaving together all of these fields. I believe classes are more interesting when the disciplines are combined. Art, music, history, psychology and mythology are all essential components of every class I offer.

Could you tell us more about how poetry and music intersect in your upcoming course on T.S. Eliot's Four Quartets?

I first encountered T.S. Eliot when I was 16, and he quite literally saved my life. I loved the Four Quartets for a decade before I discovered that my favorite passages were based on the writings of Julian of Norwich and John of the Cross... then I loved it for another decade before learning about the specific connection to Beethoven's A minor Quartet, Op.132. Eliot wrote that he was trying to do with words what Beethoven had done with music, and it shimmers and echoes in a new way when read through this lens, adding so many multiple layers of new meaning to the poems.

You also lead pilgrimages, which is an unusual thing to do in this day and age. What is the role of pilgrimages in the 21st century? What is different about contemplating one's beliefs in situ as opposed to contemplating them in a church, temple, or home?

Some things you can only learn by going to a specific place. When I was doing research for my dissertation on Mary Magdalene, I read hundreds of books and articles, but that was entirely different from what I learned when I climbed to the grotto at La Baume [the site in France where, according to legend, Mary Magdalene spent 30 years as a hermit] and interviewed the Monsignor at the abbey where some of her relics are stored.

In addition, there are places in the world that have the ability to open you up in new ways, and help you see yourself differently. Blending contemplative practices such as meditation and music with being on site can be particularly powerful.

Pilgrimages speak to people no matter what their religion. Every religion in the world shares this idea of traveling to a source of spiritual power and history to touch the transcendent. In our time, people who don't identify with any organized religion whatsoever are still moved and find meaning by, say, walking the Santiago de Compostela pilgrimage route. A pilgrimage is an outer journey that's also the mirror of your inner journey, and it's done in the company of your fellow seekers -- a rare, precious and unforgettable experience.

What do you like best about working with OLLI students?

I love the depth of their intellectual inquiry and the breadth of their experience. In every class I have taught, there are people who have read more than I have. For instance, in the course I taught on Dante last winter, there were people who had written dissertations on the Divine Comedy. One had even illustrated the Inferno and created a videotape with music. I loved being able to share our mutual passions- and I learned from them as well The depth of knowledge in this particular lifelong learning community is a sheer delight.