Joseph Grodin, former California Supreme Court justice and professor emeritus at UC Hastings College of the Law, will be teaching a course this summer on "California's Response." It's simply not possible to summarize a 60-year legal career in a short interview, but you can learn more in a video created by UC Hastings to celebrate his career. 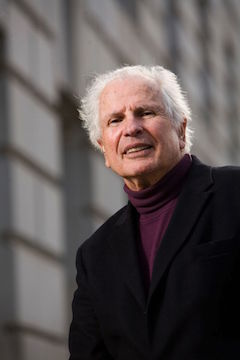 You have had a very impressive career. Could you share a few highlights with us?

I earned my law degree at Yale, then did a stint at the London School of Economics, where I earned a Ph.D. I practiced law for 17 years -mostly labor law, representing various unions - then began to teach at UC Hastings College of the Law. While I was teaching, I was appointed by Jerry Brown to the newly-formed California Agricultural Labor Relations Board. In 1979, I was appointed to the California Court of Appeal. I later served on the California Supreme Court until 1987, when I lost my seat along with Rose Bird and Cruz Reynoso during a retention election in which we were accused of being insufficiently enthusiastic about the death penalty. I went back to teaching at Hastings -primarily constitutional law and labor law - and became interested in writing about the California Constitution. I published a book on the California Constitution, now in its second edition, and I also wrote a number of articles, in particular on the notion of independent state grounds, which is the independent role that state constitutions may play in the protection of individual rights.

I retired from UC Hastings and became emeritus eight or nine years ago, but I continue to teach a course on constitutional law with Marsha Berzon of the Ninth Circuit Court of Appeals.

How has the conversation around "states' rights" and the limits of federal power shifted since the November election?

With the election, the ground has shifted in terms of federal-state relations. In the past, the liberal position tended to favor federal power over state power. There were exceptions to that trend, such as a favorable view towards states enacting stricter environmental standards. But when it comes to things like discrimination law, liberals have tended to favor federal power over state. Arguments about states' rights tend to come from conservatives defending against federal authority. But now that ground has shifted, and liberals are arguing in favor of states' rights on issues like protecting immigrants against federal authority. We're currently exploring new territory: how California law might protect citizens against what the federal government might want to do.

Given the policies of the Trump administration, what is the most pressing issue facing California? What steps, if any, can be taken?

Immigration policy is one area of concern, with the question of whether California cities and counties can protect themselves with sanctuary city statutes. This is one of a host of areas in which the Trump administration can use the power of the purse against states or other localities that don't toe the line, but there are legal arguments to be made about the limits of their authority to do so.

There are also going to be battles over alternative schools: areas where California policies around public education and alternative education may not align with federal policies.

There will be battles fought over environmental policies, for instance California's EPA waiver which allows us to establish higher emissions standards.

In the end the federal government holds most of the cards and can tear down a lot of what the state has put up. But meanwhile we're going to man the barricades.

And if the US Supreme Court were to overturn Roe v. Wade tomorrow, we still have precedent under the California constitution to protect the right to choose. If the SCOTUS were to dilute protections for same-sex marriage or gender equality, the California Constitution is available to fill in the gap.