We caught up with Jeff Hart in between a trip to Yosemite to see the seasonal "firefall" and a visit to Death Valley to view the once-in-a-decade Big Bloom. 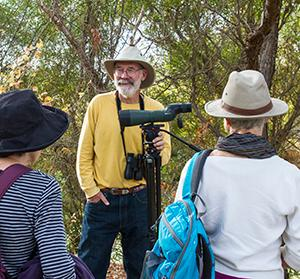 Tell us about your background and training in science.

My earliest training was as a small boy following my father on his adventures: boat racing, raising hound dogs, raising livestock... I studied environmental biology at the University of Montana as an undergraduate, then returned a few years later for a Master's in ethnobotany, which is the study of how particular cultures make use of indigenous plants. I sent a copy of my thesis -- which looked at how several Northern Plains tribes used indigenous plants -- to a professor at Harvard and he invited me to apply. So the son of working-class parents who had never been to college ended up pursuing a Ph.D. at Harvard.

I studied evolutionary biology at Harvard. This was during the era of Steven J. Gould and E.O. Wilson, so it was hard not to think about the big questions.

What brought you to the Delta?

After Harvard I did a postdoc in Sweden, but I wasn't interested in being a molecular biologist indoors. I came out to California and for many years I had a business doing environmental consulting and habitat restoration. This included some work with the CalFed Bay-Delta program. One of the conditions of their grants was to give back to the public, so I started doing boat tours of the Delta. Meanwhile, my wife Toni had a native plant nursery, and over time that transitioned into organic farming.

Those boat tours inspired me to write two books. The first one, A Natural History of the Golden State , was the basis of my Fall course with OLLI. My other book, The Nature Connection , looks at the human side of nature and the different perspectives people bring to their interactions with it. I have a longstanding interest in the human condition and nature. It's partly inspired by my work on ethnobotany, and it also ties in my time as a teaching fellow with E.O. Wilson.

These days, I'm doing more teaching and ecotourism. It feels like my calling: there's a lot of need and interest.

What were some of the highlights of teaching for OLLI last Fall?

Of course I enjoyed the people and connected with them. It was an opportunity to share with intelligent, curious, like-minded people. The "field trip" to the Delta to see the sandhill cranes at Staten Island was a high point... but one thing that stands out for me is that when people came by to say "thank you" at the end of class it was clear that they really meant it. That kind of genuine thanks hasn't happened too many times in my life.