Jeff Denson is a full professor at the California Jazz Conservatory, an international touring and recording artist, and the artistic director of Ridgeway Arts. 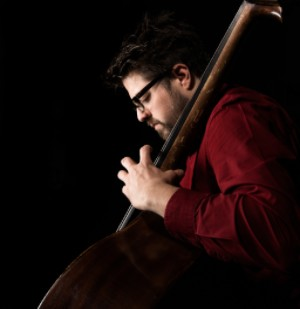 One thing that stands out in your bio is the balance between performance and teaching. How does your career as a performer influence your teaching, and vice versa?

Having a foot in both those worlds is a very important part of who I am. I’m not just an academic in an ivory tower. By actively performing before, during and after college — working with musicians, learning the hard way — I learned so much about the cultures of jazz and the unspoken aspects of music. As academics we are trained to observe levels of detail, to break things down and analyze them. That ability certainly helps me as a professor and as a performer… but it’s not the world of the bandstand, where you just hear and react and do your best.

I learn new things with every performance, and I bring those things back into the classroom and pass them on to my students. An artist has a responsibility to be a lifelong student, and I hope to pass that mindset on to my students and to inspire them to feel the way I feel about music.

And in addition to your performing and teaching — which already sounds like two full-time jobs — you also manage a nonprofit.

Yes, I’m the director of Ridgeway Arts, which operates several programs aimed at strengthening the Bay Area as a cultural center. We have a record label, Ridgeway Records. We also offer an NPR-style podcast, Ridgeway Radio, where my colleague interviews jazz musicians, other music luminaries, and professionals in the music business. Our Rising Star program personally mentors young people who are transitioning from the conservatory to the wider world of the music business; we produce their records and give them guidance. And with Ridgeway Arts presents, we partner with Bay Area venues and nearby schools to bring world-renowned musicians. The artist will send two pieces of music, which we then distribute to bands at local high schools and community colleges. The bands have a month to work on the pieces, which they will then perform for the visiting artist as well as listening to the artist perform. We have brought in the pianist Vadim Neselovskyi, the vocalist Tammy Scheffer, and the Finnish pianist and composer Karl Ikonen. The goal is to inspire students by giving them a chance to work with world-renowned musicians. Overall, Ridgeway Arts aims to be a beacon for art of the highest integrity.

What would you say to a prospective student who finds modern jazz intimidating? How will your class help make this seminal period in music history more accessible?

To me, jazz — and classical music, too — is like a novel or a film. Once you understand the basics you can listen to it like a dialogue, and just follow this improvisational conversation among the musicians. A great deal of jazz functions in improvising on a theme or form. Like a theater improv group, jazz musicians set up a scenario and set up constraints and then let a story unfold. In order to understand that dialogue, you don’t necessarily need to understand which scale is being used, but it helps to understand which role a given instrument is playing. So I’ll walk the class through which instrument is the lead actor, which instruments are supporting actors, etc.

Your course description mentions that you will be examining the music in the context of World War II, the Civil Rights Movement, and other historical events. Could you give us a brief example of how the historical backdrop of the 1940s and 50s shaped jazz and its popularity?

With the onset of WWII, many big band musicians were drafted and sent overseas, so there was a shortage of musicians. In addition, as the US economy shifted towards war production, the economic factors that had supported big bands — swing bands typically had 18 musicians — were no longer sustainable. The recording ban between 1942 and 1944 was also a factor: due to a dispute over royalties, no union musician could make commercial recordings. Because the ban affected only instrumental musicians and not vocalists, it influenced the shift from instrumental music towards vocal music in popular culture. It’s where jazz and popular culture parted ways. Because of the ban, there are no recordings of early bebop: it emerged fully formed as a genre at the end of the recording ban, with no way to trace the early stages of the shift.

You have performed and recorded with Lee Konitz, who is often described as “legendary” and as “living jazz royalty.” How did that collaboration come about, and what do you most enjoy about working with him?

Lee Konitz has been a very important part of my musical life. I first met Lee in Germany on a recording session. He like me and he liked my trio, which was a dream come true for me. A year later I was in Germany performing with my trio Minsarah, and there he was in the audience. He came to three or four more shows on that tour, and at the end of it he asked us to come play with him. So we came to this meeting, instruments and all, and then we didn’t even take the instruments out. We just sat in a circle and sang, and then Lee said “sounds like a band.”

In 2007 we released “Deep Lee – Lee Konitz and Minsarah,” and we started getting offers to play at festivals and clubs. Since then we have released “Lee Konitz New Quartet: Live at the Village Vanguard” in 2009, “Lee Konitz Standards Live – At The Village Vanguard” in 2014 and “Jeff Denson Trio + Lee Konitz” in 2015. We also have two unreleased albums, “Live at Birdland” and “Live at Schaffhausen.” We’re still performing together.

Lee is like my grandfather. I have learned so much from him about improvisation, about jazz music, and about jazz as a way of life. I had a very strong idea about what I wanted my music to be: I didn’t want to be walking onstage with pre-planned, pre-rehearsed material. When I met Lee I learned that’s what he liked about my trio, and it was so validating.

And of course, the time period of the course is when Lee’s career began. Charlie Parker once said “Lee is the only guy who isn’t ripping me off.” So I’ll talk about Lennie Tristano’s and Lee’s relationship with Charlie Parker and later Miles Davis.