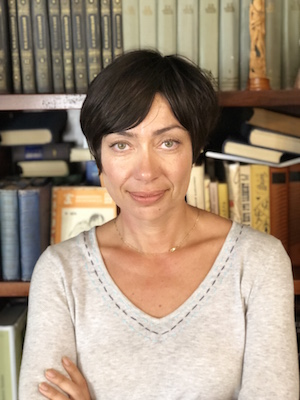 Anastasia Edel is a Russian-born American writer and social historian. She’s the author of Russia: Putin’s Playground, a concise guide to Russian history, politics and culture. Her writing has appeared in The New York Review of Books, The New York Times, Project Syndicate, Quartz and World Literature Today. She’s a staff art critic for the Piedmont Post and is currently at work on a new book, The Gone Empire. Registration for her Fall course “Understanding Russia: History, Politics, Culture” opens on July 9.

How long did you live in Russia, what brought you to the United States, and where did you live along the way?

I was born in the USSR — a country that is no longer on the map, which still amazes me because we thought it would be forever. I came of age as a Soviet citizen; I was in middle school when Mikhail Gorbachev, the Communist Party’s new General Secretary, started perestroika, a policy of modernization that included rudimentary freedom of speech. That had consequences no one could have foreseen: “freer” Soviet Union proved to be impossible. In 1991, Soviet Union ceased to exist. It was a strangely ordinary event: someone just announced on the radio that USSR is now “The Commonwealth of Independent States,” and that only a few of the former Soviet republics had chosen to join in. Few people realized it was the end of a historical era. Not much changed initially, except that things were getting harder and harder economically, with hyperinflation and collapse of the old manufacturing and distribution system. Still, most people I knew were very happy that the Soviet Union was finally over, because it wasn’t a great place to live.

By the time of my graduation from the university with a degree in languages in 1993, Russia has changed dramatically. There was no more ideology; people were allowed to speak their mind, to travel abroad.  Business and entrepreneurship were no longer suppressed, and every day a new firm was founded to cater to a myriad of our unaddressed consumer needs. But that transition to free market also brought about weird things: criminal gangs harassing businessmen, racket, even shoot-outs on the street. And the privatization of what used to be the Soviet state’s assets—plants, factories, oil refineries—was grossly mishandled, a few people close to power essentially buying out Russia’s national wealth on the cheap. It was a very strange time.

My degree in languages and Russia’s sudden openness allowed me to explore all sorts of opportunities. I worked as a fiction translator for a while, then began helping Western firms to set up operations in Krasnodar, a southern city where I lived. One of my colleagues told me about British Council in Moscow, an organization that promoted business and cultural ties between Russia and UK. I applied for a three-week business travel grant and ended up with a scholarship to study for a Master degree in business. In 1995 I moved to England.

The MBA was a huge challenge. We had a planned economy: there were no such concepts as supply and demand, price elasticity… I was mostly worried about my English language skills, but the language was fine. I simply couldn’t understand what I was reading!  At the end of the first semester I managed to get all Cs, just enough to keep my scholarship. Gradually, things started making sense. In London, I met my future husband, another Russian who lived in Boston. This is where we settled after I finished my degree and we got married. Then in 2003 my husband got accepted to UC Berkley for his masters and we moved to the Bay Area. I’ve been living here ever since.

The course description that you sent us asks which national myths, beliefs and historical developments feed Putin’s anti-democratic ideology. Could you give one or two examples of that phenomenon?

A lot of attempts to understand Russia’s behavior end up with a quest to understand its President Vladimir Putin.  But Russia is more than just one man. It is a country with a long, complex and often violent history. That history breeds certain attitudes. Centuries of foreign conquests, for instance, have led Russians to perceive themselves as being under constant threat of invasion. It is relatively easy to stoke those deeply ingrained fears and mobilize the nation against some kind of threat, real or not.

Russian autocrats are also very fond of the idea Russia’s unique path, and of Russians as Dostoyevsky’s “god-bearing nation.” They often invoke innate spirituality of the Russian people as a counterweight to godless and materialistic West (Russia’s assumed role as the “Third Rome” after the fall of Constantinople provided the necessary supportive narrative.) In today’s Russia, the myth of Russia’s messianic duties expresses itself most often in the concept of “spiritual staples,” promoted by the Kremlin’s ideologues with the support of the Russian Orthodox Church; we will discuss it in more detail in class. This alliance between Putin’s government and the church still amazes me:  I grew up in an atheist state where God had been, for all intents and purposes, cancelled.  But in Russia, the pendulum swings widely. Those who walked past closed churches in the times of my youth now flock to the streets to protest movies “insulting to the feelings of believers.”

Do you find that your background in language and literature shapes your perspective when you write about politics?

Literature has not just been my passion; it defined me. We didn’t have too many entertainment options in Soviet Union, so books filled most of my free time. And I always wanted to study English. The sound, the vocabulary, the intonations—everything fascinated me. Plus, when I was growing up and Russia was closed, reading and speaking in a foreign language allowed me to travel the world despite the Iron Curtain.

Literature makes one think more deeply about the world, question its dogmas, and ultimately search for your own, unfiltered opinion and understanding of reality. As a writer, I am trained to look beyond the surface, to dig deeper into motivations and emotions, to search for patterns between seemingly disparate bits of human behavior. This is what I try to do in all my writing, including when I write about politics.

And you’re also a fiction writer.

I was trained as a fiction writer in the MFA program [at Pacific University]. Fiction is what I love doing, both short and long form. But after the 2016 election, I felt a strange aversion towards writing fiction. In the world of “alternative facts,” I simply couldn’t bring myself to construct artificial worlds, to build and empathize with figments of my imagination. Instead, I felt that my experience of growing up in a country that has a very fraught relationship with freedom, and that continuously fails to safe-keep it, must be shared. Whatever the skill I have with words, I thought it would be best, at our current moment, to apply them to cultural and historical commentary. Several other Russian writers that I know have undergone a similar metamorphosis in the last couple years.

Anything else you want to add?

I am teaching this class because I want to have a conversation about Russia. When I left Russia and the Soviet Union collapsed, Russia became international backwater: the Evil Empire disintegrated and everyone lost interest.  Not until 2014, when Putin annexed Crimea, did Russia re-emerge as a subject of conversation.

The annexation of Crimea was the reason I wrote Putin’s Playground. Until then, I had simply watched Russia from afar. Because I had made a choice to leave, I never felt a moral right to criticize what the Russian people and their government are doing. But Crimea changed that; it was a watershed moment for many Russians. The country that we had left, the country of Yeltsin, had been going towards democracy. This is no longer the case, and it pains us, children of Gorbachev’s perestroika. I wanted to understand what happened. So I wrote the book—for a fairly narrow audience, I was thinking back then.

But then the alleged Russian interference in the 2016 election happened, and all of a sudden Russia became mainstream news. It is not the kind of attention that you want: I’d rather talk about Nabokov or Chekhov, our traditional “visiting cards” to the West, than about troll factories and Soviet propaganda tactics. But it is what it is. The important thing is that Russia is a big and complex country governed by a unique set of rules, dynamics, attitude and beliefs. This class is an attempt to look at the country in a structured setting and to understand why Russia behaves the way it does.