Enrique Lima holds a Ph.D. from Stanford University. He teaches history and culture in the Departments of Native American Studies and Ethnic Studies at UC Berkeley.

Your course "Native History: 1900-Present" covers a big sweep of history. Can you walk us through the defining periods? 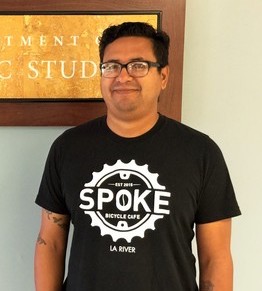 We’ll start around 1880 with the military conquest of Native nations. This was when Native people’s ability to be self-sustaining was taken away. We call this the period of assimilation and it marks beginning of modern Native America. All of the assimilationist policies during this time — the Dawes Act, which allowed the federal government to break up tribal lands, education, the banning of traditional ceremonies — created so many endemic issues. Poverty, economic dependence, social instability all stem from it.

Then we're going to transition from around 1930 to the end of World War II in 1945. This is the period of the Indian New Deal. What we see here for the first time, under Roosevelt and under the director of the Bureau of Indian Affairs John Collier is a move by the federal government to affirm a Native future in which, for the first time, federal policy considers the idea that Native people are, in fact, not going to disappear. It’s a tremendous shift away from assimilation. The first major policy of the Indian New Deal, which is officially called the Indian Reorganization Act, ends the policy of allotment. It basically decriminalizes Native identity and ends all these destructive assimilation policies.

Interesting that at the same time the federal government is shifting away from assimilationist policies towards Native peoples they’re forcing Japanese Americans into interment.

You're about to have your mind blown because what happens from around 1945 to 1970, more or less, is what we call the “termination era." Once again, federal policy shifts away from affirming a Native future to policies that are deemed to basically make the distinct status of Native people disappear. The federal government tries to terminate the treaty status of Native nations. It wants to no longer recognize them as distinct legal bodies and it wants to get out of its legal and moral obligations to them. Now this is the part that will blow your mind. The person put in charge of termination policies was the same person who managed the internment of Japanese Americans, Dillion Myer.

In the face of this push to terminate Native nations as legal entities emerges opposition in the form of Native nationalism. That's the 1960s. The Red Power movement, the American Indian movement — all of these groups rise up in opposition to termination and they defeat it. Nixon undoes the federal policy of termination and moves away from it. At that point, many of the nations that had been terminated in the 1950s regained their status in the 1970s.

Can you talk more about the Red Power movement and Native nationalism, and their connection, or not, to the Black civil rights movement at the time?

That said, when Black nationalism emerged under Malcolm X, they definitely understood that because it was about separatism. There's this incredibly brilliant and funny Native intellectual from that period called Vine Deloria, Jr., who observed about the inclusion argument of civil rights: “Blacks seemed to be saying that white society was bad, but they wanted it anyway.”

From the 1970s to the present day it’s been the era of Native sovereignty, in which Native nations have tried to build on and expand their right to self-determination. They've done so by developing economic sovereignty, particularly through casinos and through natural resources. Sometimes, through tourism. as well. And they've tried to expand on their cultural sovereignty by affirming their tribal identity.

Where do you think things go from here?

I do know that Native people find themselves in a peculiar position in that today they have more political and economic power than they've ever had since before colonialism. But at the same time, by any kind of social metric, whether it's poverty or education or health outcomes, they are people at the bottom of society, which tells us how powerful colonialism has been.

What do you think OLLI members will find most revelatory about your course?

Most people believe that native people lost their right of self-governance as soon as white people arrived, which is, of course, what white supremacy wants you to believe. But the truth of the matter is, Native nations have never lost the right to self-governance, because their right has been affirmed and recognized in treaties and further recognized, over and over, by the Supreme Court including last year.

I was just about to ask about the McGirt v. Oklahoma case. Did Justice Gorsuch's stance surprise you?

It's been since the time of Reagan and the racist undertones of Republican policy that Natives have more and more turned away from the GOP. That being said, a significant number of Natives continue to vote Republican because they care about land use rights, gun rights, and they continue to distrust the federal government.