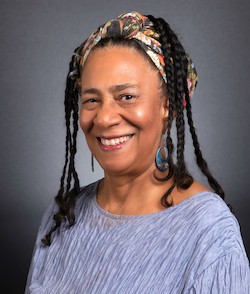 What role do you see art playing in the movement for racial and social justice?

I believe Black people are, without question, the canary in the gold mine. To understand what is happening in America, most people don’t read sociological works or histories. But they do look at art. So art is a good way to communicate. There's a wonderful poet named Wayne Corbitt who’s passed on. One of my favorite lines from one of his poems is “I've been tried in the fire and I came out gold.” And that's what I feel when I look at not just the five African American artists I'll be talking with in this course, but African American artists in general. They've been tried in the fire and they came out gold.

How did you come to select these particular artists to join you in conversation?

My first criteria was to select artists who have the perspectives and depth of experience that can only come with time. Now don’t get me wrong; I think the young are wonderful. They wake us up. But I also think there’s something to be said about hearing from people who have had a lot of years to look back at, a lot of time to consider the impact of their art and the impact of art in general. Each artist brings something unique to the table.

Woody Johnson is a sculptor who also does wood cuts and paintings. He did some training in Africa, and has lived in Oakland forever. I appreciate that he has these various art forms and has both public and private works. He teaches art. He mentors people in art. He curates. He’s just an incredibly thoughtful person. He sees his art as representing African diaspora culture as it speaks with a voice for all humankind.

Amana Harris is a graduate of California College of the Arts where I teach. When she left, rather than just keeping up her own art, she started a program called ArtEsteem. She looks at art as a conduit for both communicating social issues and for giving young people especially hope and self-esteem. Several big murals Oakland have come out of her project. I wanted to bring Amana in because I think that a lot of times, we see art narrowly. That there are artists and they make art and it goes into our galleries and museums, or it doesn't. I wanted to showcase someone who is still a working artist, but who's using her art in a bigger way. Her focus is to make the community a better place through art, but it doesn't necessarily have to be through her art. I think that’s a really important perspective.

Karen Seneferu is a self-taught artist. One day she started making these absolutely incredible dolls and doing shows, and then bigger shows, and attracting a lot of attention. She does installation art, in art that matters, and is very much into African and African dyes and the art of ritual. She does her art as healings and as Black women power. I think it’s quite wonderful and individualized. I’ve seen several of her installations, which you only see in galleries or museums. It’s not like people buy installations for their home. So again, it’s a way of creating public art in a very giving way.

Stephanie Johnson is a fascinating person. I think that people see visual art quite narrowly. Is it sculpture? Is it painting? Is it ceramics? Is it fabric art? She does light art and is also a photographer, which she’s won awards for. What I particularly like, though, is her ability to broaden out the idea of art because I think we would be a stronger society if we saw art in multifaceted ways.

Lastly, there’s William Rhodes. He’s been in San Francisco for 30 years. He was born in Baltimore, and had to deal with some really difficult things in terms of racism and real harshness. What saved him was art. He got into an arts high school and eventually ended up at UMass, Dartmouth, where he got his MA in furniture sculpture. His art is beautiful, just deeply intricate and multi-dimensional. He does installations, too. He speaks very much of the experience of being an African born in America, of being African American. And out of that, he looks to both decode and explicate what it is to be living in America as a Black person. The beauty and the hardness and the harshness of it.