Deepa Natarajan coordinates the UC Botanical Garden’s public education programs. She holds a B.A. in medical anthropology from Boston University and a MSc. in ethnobotany from the Royal Botanic Gardens, Kew and the University of Kent in England. Natarajan believes that plant conservation goes hand in hand with preserving culture and knowledge of using plants for food, clothing, shelter, medicine and more. 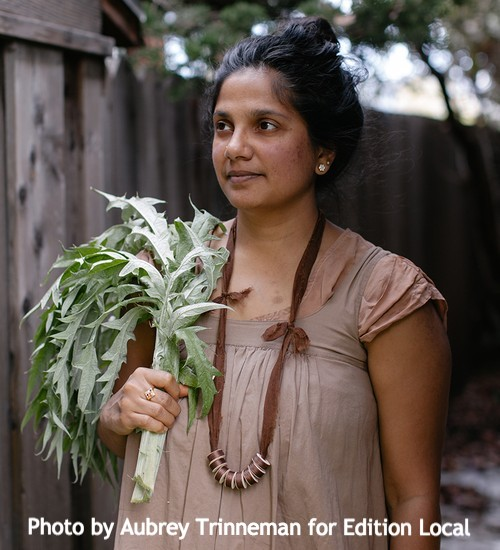 You’ve been running the educational programs at the UC Botanical Garden for the past 12 years. Tell us more about the public education aspect of the garden.

Our education department has two main program areas. One is our K-12 programs that serve school-children, and then our programming which is for the general public, including families. My focus is on adult public education which has been a great journey over the last 12 years, because plants give us the possibility to go in so many different directions. We have hosted courses that range from hardcore botany and horticulture, to home gardening, plant science and identification — all the things you might expect from a botanical garden — but also we have developed a key aspect of our programming - how people use plants. We cover topics such as cooking, basketry, medicine-making, natural dyes, making perfumes and incense, paper-making… the list just goes on and on. These programs have been really well-received. Our membership and a supporter base are so eager to learn about plants and how they’re used, and — because we live in such a wonderful climate — how people can grow them at home and harvest them. This fits into the bigger picture of how we can live more sustainably and with less impact on the planet. These are issues that our community is interested in and concerned about, and I think that our programs have gone a little way towards making a difference in the way people consume because we’ve offered classes in those topics.

A few years ago you took time to learn more about traditional fibers and dyeing techniques. Where did you go and what techniques did you study?

I developed an interest in fiber and dyes pretty much right off the bat when I joined the garden. I discovered that there was an exhibition of fiber and dye plants that was not on view; docents had created it in the 90s and it was just sitting in a box. It was such a discovery; it was like a treasure chest for me. I was interested in medicinal plants, I was interested in all these aspects of how people used plants, but I had no concept about plants being the sources of the colors of our clothing. So I started working with local artists, dyers, fiber producers, and weavers, and we created a program here in 2007. Every March since then we have held a festival highlighting plant fibers and dyes. About five years into my time at the garden I took a sabbatical to travel to India. I spent six months learning dyeing in India and I was also able to attend an international symposium on natural dyes in France sponsored by UNESCO. Two years ago I was able to take the work we have been doing here at the Garden and present it at an international textile symposium in Oaxaca, where I was also learning more about dyeing. I get to sometimes share that knowledge with our community here by teaching natural dye courses at the Garden. It’s another one of these worlds that’s endlessly fascinating and there’s so much to learn and discover.

We tend to feel pretty far removed from it now, but plants have played a pretty substantial role in history: textile dyes, sugar cane, tea, opium and cotton all had major economic and political impacts. What are your thoughts on that?

Not only do these plants play such a critical role in our daily lives, but in our history they really are the catalyst for great explorations of the world and great journeys to travel to new places. For Columbus to come to America, for Captain Cook’s voyages and many of the other voyages that set off from Kew Gardens: those were expeditions to find plant material that would be of great economic importance. It’s not at the forefront of our history lessons,but plants are and continue to be important in geography, history, politics, and many other areas of both current and historical events. And I think that with natural dyes and with many other plants that had great economic importance, the Industrial Revolution marked the change from plant products being the source of most of our daily goods to synthetic versions, because of the difficulty of obtaining these goods due to crossing borders, import taxes, or just the sheer labor force required for harvesting or harvesting or processing some of these materials. So plants are central, which is why I think that our role as a botanical garden is so important. Our mission is really threefold: research, conservation and education. But my role in education is to highlight the importance of plants and hope that will inspire a love and appreciation for the conservation of them.

Could you give a few examples of surprising or unexpected discoveries to come out of the field of ethnobotany, either recently or not so recently?

There’s the whole world of plant pharmaceuticals, which is not necessarily my personal expertise but which has been such a huge factor in the history of bioprospecting, plant expeditions, and the search for plant medicines in the Amazon and elsewhere. Quinine, which is used as an anti-malarial, is one of the big stories in ethnobotany. It’s the bark of the chinchona tree — also known as the fever tree. And it ties back to natural dyes, because the man who synthesized the first synthetic dye molecule, mauvine, was a young chemist named William Perkins who in 1856 was working with quinine derivatives and discovered that there was this possibility to make mauve dye. The interesting thing is that quinine and madder — the traditional source of red from around the world — are actually in the same plant family, the Rubiaceae, which is also the same family as coffee. So it’s just fascinating that quinine, madder, and the first synthetic color are all related in history, with this real pivot point in 1856.

The most promising aspect of ethnobotany is that it is inherently interdisciplinary: it brings together thinkers, scholars, makers, and practitioners across fields both within academia and beyond. It bridges many different worlds, and I think that the study has incredible potential. It has proven to really shed light on issues related to climate change, migration, and our globalized society. It has really moved out of the traditional realm of economic botany and the historical sense of people using plants, and into this world of the complex relationships between plants and people across space and time. I think that is incredibly important and valuable.

Some of the concerns and challenges include those that are inherent to working interdisciplinarily, which can be difficult in terms of methodologies and practices. More pressing is the rapid rate at which we are losing plant diversity, linguistic diversity, and cultural diversity in an age which some scholars have dubbed the Homogenocene. Geographical boundaries are getting blurred, cultural boundaries are getting blurred, and there is really a homogenization of culture happening in parallel with species being spread across the borders. All of these are complex topics, but threats to biocultural diversity are one of the deepest concerns that I have. Knowledge transmission — passing things down from one generation to the next — is at a critical juncture right now as populations continue to urbanize and migrate and cultures are losing their linguistic diversity and traditional knowledge of plants.

It’s very important to me in my work at the garden to make connections to our diverse Bay Area community. We have an incredibly diverse garden of over 10,000 species and we happen to be living in one of the most diverse areas in the country, and I would really like to connect the dots between the two. So that’s my goal for next year.

Do you have a favorite plant species or ethnobotany story?

What comes to my mind are a whole host of ritual plants used in Hinduism, because that’s what my Master’s project was on. My fieldsite was a temple in Livermore that’s one of the largest and oldest temples in the US built by the Indian diasporic community. I got to go deeply into the plants used at that temple and two of them that stand out are plants whose seeds are used to designate the priests: sacred lotus — Nelumbo nucifera — and a large tree — Elaeocarpus serratus — which is rudraksha. The priests at the temple are highly differentiated between the Vishnu priests and the Shiva priests, so the Vishnu priests wear lotus-seed garlands and the Shiva priests wear rudraksha garlands. So I thought that was very cool that the seeds make the distinction… the lotus seeds are smooth and shiny and Vishnu is thought to be the lotus-eyed and lotus-footed god — you’re supposed to place lotus flowers at the feet of the god — and the rudraksha seeds are supposed to represent the many faces of Shiva.

In my own little garden in Berkeley I try to maintain some plants that are important for our Hindu rituals, so I have my own sugar cane plant, which we use for the festival of Pongal, a harvest festival. And speaking of harvest festivals, just recently I got a note from one of my neighbors saying “we really need an unopened palm frond for the lulav for our Sukkot rituals; could we come and cut one from your yard?” I was thrilled. She came over and cut it, then tied it with a willow branch and a myrtle branch; the three are woven together and used in various rituals for Sukkot, along with a citron. So then I started researching online the origins of this tradition and what it represents. For my next project I would like to write an article about urban Bay Area Jews and their use of palm fronds during this holiday of Sukkot: where they all come from, what people do… it’s fascinating.