Chuck McFadden covered California politics for The Associated Press in Sacramento and is the author of Trailblazer: A Biography of Jerry Brown. His articles have appeared in the San Francisco Chronicle, Los Angeles Times, Sacramento Bee, San Diego Union, and the Bay Area News Group. 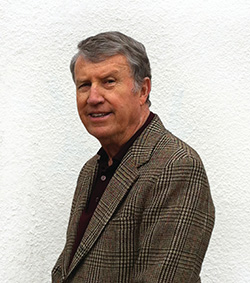 You were a journalist with the Associated Press for a number of years. Could you describe one or two highlights from that time?

I was an AP reporter in Sacramento in the mid-1970s, back in the days when Ronald Reagan was governor of California. It was like going to the circus every day. We got a lot of national coverage: since Reagan was Reagan, what he did got picked up by the national press. When he was first elected, people scoffed at him as a lightweight — as a feather-brained actor with no political experience. They overlooked the amount of experience he had gained as a seven-term president of the Screen Actors’ Guild, where he had spent extensive time negotiating and making deals. Reagan appointed good people, and no matter how you felt about his politics, he was impossible to dislike. It was a jolly time; much more cordial than the current political climate.

At one point I was scheduled to interview Reagan — this was when he was campaigning for Goldwater — but the restaurant where we met was too noisy for a radio interview. So we went off looking for a quieter spot, and finally found a potato storage room. So for a moment or two we were blundering around in a dark room and then Reagan found the light switch and we did our interview.

At another point, George Moscone tried to get me to smoke a marijuana cigarette on the floor of the State Senate — back in the days when everybody smoked. It was a very long, very boring session, and Moscone held out a funny-looking brown cigarette and tried to get me to light up. But I had just quit smoking, so I turned him down.

Then there was the time I got to interview Gerald Ford in his underwear. I was with the Los Angeles bureau of the AP, and Ford — who was Republican minority leader of the House at the time — had just given a speech in the Century City Hotel. I had some questions for him afterwards, and he explained that he had a flight to catch and needed to change clothes first, so I interviewed him in his hotel room as he changed. He told me to look him up the next time I was in Washington, but by my next trip to DC Ford was President.

Jerry Brown has been a fixture of California politics for so long that we tend to take him for granted. Your biography of Brown is entitled Trailblazer; what had you choose that title?

Jerry Brown was a trailblazer in that he appointed a number of women and minorities to high positions during his first term as governor. The most famous was the appointment of Rose Bird to the California State Supreme Court; she was controversial and was not re-elected, even though re-election was usually pro forma. Brown also appointed [Latino civil rights activist] Mario Obledo to head California’s Health and Welfare Agency. Brown also carried the flag pretty vigorously for farm workers: in the wake of the farm workers’ strike, he created California’s Agricultural Labor Relations Board.

Which candidates should we keep an eye on in the upcoming gubernatorial and senate elections, especially now that Feinstein has announced her intention to run for re-election?

With California’s “top two” primary, the chances are overwhelming that we will have Democrat-versus-Democrat choices in the general election. It will be very difficult for Republican candidates to make it to the final round in either of those races, since Republicans are now just above “decline to state” in terms of statewide voter registrations.

This is unfortunate: California deserves a robust two-party system. In my days in Sacramento we had some great Republicans — including Peter Behr, a Republican environmentalist from Marin County, and Fred Marler from Redding — and much stronger bipartisanship.

Which ballot initiatives should we keep an eye on?

I’m writing an article on this for Capitol Weekly as we speak. Things are still taking shape, but there are currently 23 initiatives ranging from a move to get rid of the gas tax to repeal of the state’s top-two primary. The latest filing — from late October — is an initiative on “affordable housing” that would limit communities’ ability to impose rent control.

As part of my course, I intend to divide the class into opposing camps and tell them they are now highly paid campaign managers in charge of coming up with tactics to win the hearts and minds of voters. They’ll be randomly assigned; having to come up with campaign strategies is an excellent way to understand the mechanisms of a campaign.

Your syllabus mentions the “Trump effect” on Republican candidates. What do you mean by that?

We have about seven California Republicans who are on the horns of a dilemma. They can’t afford to anger the base of Trump supporters in California — mostly in the Central Valley — but they still have hopes of attracting more moderate Republicans and even some Democrats. They have to walk a narrow line between pro-Trump and anti-Trump Republicans, and of course the Democrats are salivating at the thought of capturing those seats.

This same dilemma is also playing out nationally. Jeff Flake, who recently announced he won’t be seeking re-election in Arizona, doesn’t have the support of Trump loyalists but can’t attract enough non-Trump Republicans and Democrats to give himself a chance.