Christopher McLeod directs the Sacred Land Film Project in Berkeley. His most recent project, the four-part film series Standing on Sacred Ground , has been shown on dozens of PBS stations since its release in Fall 2013 and was the result of five years of filming around the world. His 40-year film career also includes Poison in the Rockies , and The Cracking of Glen Canyon Damn with Edward Abbey and Earth First! He has an M.J. from UC Berkeley's Graduate School of Journalism and a B.A. from Yale. 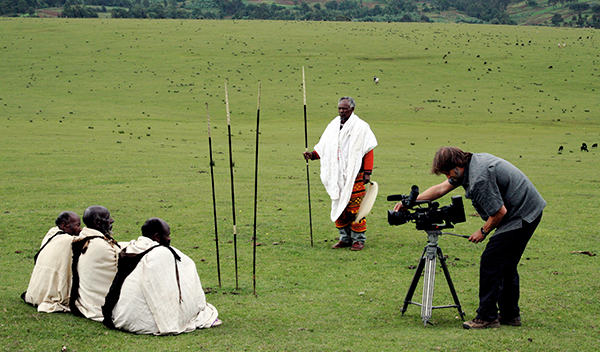 You have been making documentaries about sacred spaces, land use and indigenous peoples for over 30 years. In that time, which issues have improved and which have become more urgent?

When I started, sacred sites and indigenous peoples were more or less invisible, and that's no longer the case. These days, outsiders will ask questions about how to behave at sacred sites and whether they should even go. Twenty years ago, nobody would have asked that.

So these sites and cultural practices are more visible, and they receive more respect as a result. We're seeing more laws and policies that acknowledge sacred places and try to enforce real protection, and native peoples are more empowered in requesting that their traditions and lands be respected. We have also seen an interest in rejuvenating native languages and cultural practices. We see more mapping of indigenous territories and stronger efforts to protect them, with some success stories like the Kayapo in Brazil. So there are examples of good news.

At the same time, consumer demand and industrialization are both accelerating, which means that activities like mining and fracking keep expanding into remote areas. And then there's climate change, which is the cumulative result of consumer demand and which will have a massive impact on sacred lands everywhere.

The purpose of my films is to tell stories, to connect cultures, to share successes and disasters, and to build awareness of these places and why they should be respected.

Your first documentary was a nine-minute short featuring Edward Abbey and Earth First! What was it like to work with them?

At the time I was a graduate student in the School of Journalism at UC Berkeley, and I was working on a film about coal and uranium mining in Hopi country. My topic was mining; I knew nothing about native lands. I had read Edward Abbey's classic book, The Monkey Wrench Gang , and I gave copies to my two film partners because I considered our filmmaking to be a form of monkey-wrenching: we were throwing an information wrench into the machine. I wanted to interview Abbey for our film, so I sent him a letter requesting an interview and asking whether it could take place on the Colorado Plateau instead of at his home near Tucson. Abbey wrote back -- one of his famous white postcards -- saying: "Yes. Meet me at Lone Rock campground nine miles north of Glen Canyon Dam on the spring equinox. We have something planned."

A few weeks later as we drove in, the Earth First folks said, "Who are these guys?" and Abbey replied "They're my film crew." We hadn't known we were his film crew. We spent a couple days there amidst a pretty wild party atmosphere at the campsite. They were getting ready to unroll a 350-foot strip of black plastic down the face of Glen Canyon Dam to look like a giant crack.

So we filmed their guerilla-theater action, and we interviewed Abbey with the dam in the background. Earth First! used our film all that summer. It was in 1981 -- when James Watt was Secretary of the Interior -- and that was basically the beginning of Earth First! as a radical environmental movement.

Not only was it helpful for me to make a short film prior to finishing my thesis film -- I learned a lot -- but it allowed me to focus on Abbey in a way that wouldn't have been possible in the context of the documentary film on mining. He was just so quirky and funny and offbeat, and it would have been a real disservice to give him two 25-second sound bites in an hour-long film.

In your five years traveling the world to film Standing on Sacred Ground, are there people, places or experiences that really stood out for you?

We filmed in eight locations in seven countries, so it's hard to narrow down the list. But here are two examples...

I started visiting the Winnemem Wintu in the early 1990s, when they were fighting the construction of a ski resort on Mount Shasta. At the time, all of the younger members of the tribe were opposed to filming, but their elder Florence Jones said yes. At age 86, she knew that this was an opportunity to tell her story and document and preserve traditions. We filmed ceremonies that had never been filmed before. It was a very collaborative process: we filmed, then showed them footage and got feedback, then showed a rough cut and got feedback, then showed the finished product... and they liked it! The distribution process was collaborative as well: instead of just screening the film ( In the Light of Reverence ) and quickly moving on to the next project, we spent four years doing screenings, and we stayed in contact the whole time. When we started Standing on Sacred Ground in 2007, the Winnemem Wintu, and their new leader Caleen Sisk, were fighting the federal government plans to increase the height of Shasta Dam, which would increase the storage capacity of Shasta Lake but also flood more of the Winnemem lands and drown many sacred sites. It was a natural choice to tell this next chapter of their story and continue a powerful collaboration.

Another story that stands out is when we were in Papua New Guinea. Elders in Bosmun village told me we could film a canoe ceremony, but at the time they didn't mention that they hadn't done one in a decade. Part of the ceremony involves playing two transcendental flutes, but they didn't have any flute players in the village so they had to bring in a couple of flute players from up the river. Afterwards, several villagers decided to relearn the instrument and they went to a 72-year old master to teach them. Some time later I got an email saying that Bosmun had just initiated 12 flute players after a year of training, and I recently got another email saying they now had 8 more. They credit our filming in the village with inspiring the revival of this tradition. As a filmmaker you're always worried about unintended consequences of your presence; in this case it was nice to see a positive outcome.

What are you looking forward to in teaching this class?

All my films are educational, and every screening is an educational opportunity whether it's at a university, an elementary school, or a theater. Beyond making the films we have compiled educational materials that teachers can access on our website. That said, this is my first time planning a sequence of classes aimed at generating a discussion that we can build on week after week. Also, an OLLI audience will have seen these issues evolve over time, so they'll be bringing that context and set of experiences into the classroom.