Carlos D. Torres, Ph.D., is a media anthropologist who has spent years researching the ways Maya people have adapted new media technologies to tell stories derived from their own cultural legacy. Dr. Torres has recently opened new research arenas in Europe, looking at paleo art and the larger story of human communication. He is teaching “Cultivating Human: How Evolution, Diversity and Communication Uniquely Shaped Human Beings” with us this fall. 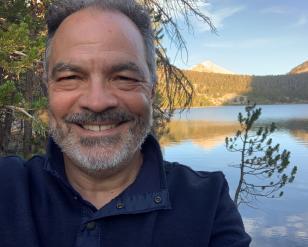 Media anthropology sounds like an intriguing juxtaposition of new and old. Can you explain what it is?
Media anthropology is an area of study within cultural anthropology that emphasizes ethnographic research as a means of understanding media producers, audiences, and the deeper cultural dimensions of representation in mass media.
We answer questions like: How are messages communicated and what is particular to the medium of communication itself; how are media narratives constructed and what are the rhetorical strategies involved; how do the sources contribute to the context of stories and narratives; how are the people of a given region going to react to public media like political speeches; what are the underlying cultural sources that contribute to shared world views in a given region and how do those differ among individuals?
Given all that, the world must be a pretty interesting place for you these days.
My head’s exploding.
The title of your course is “Cultivating Human.” Besides being Homo sapiens, what does it mean to be human?
Humans are both complex and simple, unpredictable and very predictable: As soon as we define who we are we are liable to outgrow our own definition, or a new philosopher finds a way of rejecting an outmoded definition, and this has happened through a successive history of defining human. So I can give you my more narrow definition of what it means to be human.

Human beings are endlessly adaptable, even though as a species our genotype is really narrow. Genetically we are all almost identical. We’re less diverse genetically than a single troop of baboons.

But because humans have the greatest abilities of metacognition, I think to be human is to take on the great responsibility that comes with this special gift. We owe to each other and the planet to be caretakers of life, as it communicates with us—and it all communicates to us in one way or another. So often we forget that: everything in this world communicates to us, we just have to listen.

What aspects of human communication distinguish us from other animals?

Other animals enculturate their young, meaning they give their offspring opportunities to learn, but human beings are raised everywhere through a long enculturation process made possible by parent to children communication. Human beings differ from our great ape cousins in that we developed the ability to follow each other’s eyes, to read nuances in the expression of our faces. The great apes follow our heads, but not our eyes.

Our hominid ancestors could probably have read lots of non-verbal gestures from one another. On a continent full of social animals with very dangerous social predators, I would argue that our need to communicate really drove our cognition, expanding our brain with the need to read and interpret signals from each other and also signals emanating from our natural world.

Did the move from oral to written language impact — or create — divergent power structures and status?

Written language used to be associated directly with the agricultural revolution, where it occurred around the world, and the assumption was that power and status were ratified through proclamation. In societies where only a small number of individuals were able to write, and only elites used language, the narratives they produced were generally about elites and nobles, telling all how great they were.

The alphabet democratized written communication, making written communication easy to learn and stimulating societal-wide discussions all over the Mediterranean. Generally, the higher the literacy rate, the less likely a society was to be ruled with a strong-handed king or a few elites. Literacy means more democracy and greater rights for all. But there was tribal genocide, propagandist messaging, monuments built to signal the power of one man, before writing.

The ability of one society to develop faster than another is built upon a social geography that fosters toleration, acceptance and even reverence for shared knowledge from diverse sources of information and learning, even from outside. This first involves a society that can translate knowledge from around the world, a society with the greatest language diversity. The knowledge base of any developing society comes from all over the world, but this is forgotten or ignored when technological development is co-opted for the cause of nationalism and warfare.

How do you think we can overcome ethnocentrism to better understand one other?

All societies are historically ethnocentric. It is because as primitive hominids we protected our families, our own relations first because we depended upon their mutual support. As Homo sapiens we lived in bands of small groups of people for tens of thousands of generations. We referred ourselves in our bands and tribes as “the real people,” as many Native American tribes referred to themselves at first contact with Europeans.

When we listen to another person’s story, we create the potential for understanding their experience and therefore, for empathy. And we have done this in modern society through reading novels of diverse people and places, watching films about other cultures, travelling and speaking to other people. We become less ethnocentric. But to be fully empathetic to others, we have to use our heads to understand, to evolve our understandings, but also open our hearts to change our attitudes from the inside out.

As an anthropologist, I know we’re hard-wired to find differences with others before similarities. The internet has made it easier to surround ourselves with our own “algorithm” of tastes and views. And so much of mainstream media new coverage frames important issues through a dualistic lens: either black or white, conservative or liberal—when human worldviews are really much more complicated and experiential than a tweet or a label. It can be easier for of us to stay with our biases rather than to open ourselves to learning about others, but the discovery is so worth it!