"Mr. Chief Justice and may it please the court..." The first time William Bennett Turner uttered these words before the highest court in our country, he was in his 30s. 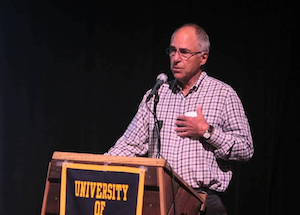 His new six-week course for UC Berkeley's Osher Lifelong Learning Institute looks back on a decade of first amendment decisions by the Roberts Court that have changed the way our elections are decided, what we can and cannot see and say, and who can protest where and why. Analyzing court opinions, students will discuss where the court has fumbled and how first amendment rights have fared under it.

Turner, who graduated from Harvard Law School and received a Fulbright fellowship, says he came to specialize in first amendment law by accident. "I was working for the NAACP Legal Defense Fund in the '60s and '70s and assigned to represent prisoners who had no civil rights -- our government censored what they could write and what they could read. So I educated myself on the first amendment and that led to my first two cases before the Supreme Court."

After those cases, his path was set and he left the Legal Defense Fund to start a firm in San Francisco dedicated to "unusual litigation." What's unusual? "Cases that nobody else could afford to take. My partners and I decided we would scrape together the resources and find a way to make them happen." One example: the famous 1991 KQED v. Vasquez trial in which the court was asked to allow the press and television cameras at San Quentin during executions.

Turner's work with KQED led to numerous awards as its legal affairs correspondent including for the PBS series "We The People," which Turner co-wrote. He has since written dozens of articles for outlets such as the New York Times, Politico, Wired, the San Francisco Chronicle, Harvard Magazine and various law reviews. His 2011 book, "Figures of Speech: First Amendment Heroes and Villains" inspired a reviewer for the National Association of Criminal Defense Lawyers to write, "At the center of the book is its author, lawyer William Bennett Turner, who is personally involved in nearly half the stories, but who is too modest to anoint himself one of the First Amendment heroes. He does not have to; his advocacy speaks for itself."

In addition to continuing to teach first amendment law at UC Berkeley, Turner tries to keep up with his two children, a son in London and a daughter who trots the globe for Airbnb. At home his favorite venue is El Cerrito's Mira Vista golf course. He lives in Berkeley with his wife.

Here is an earlier interview of Bill Turner from September 2011: https://olli.berkeley.edu/node/221