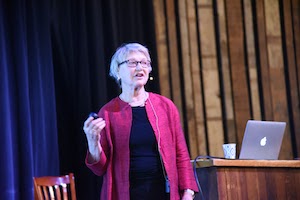 Bev Crawford is professor emerita of political science and International and Area Studies, and the former chair of the Center for German and European Studies at UC Berkeley. The author of numerous books and articles, she has taught for OLLI since its inception. We caught up with her shortly before a trip to Haifa, Israel to teach a class there on the refugee crisis.

How would you define “fake news”? Is it just inaccurate reporting, or news with which someone disagrees? Or is the intent to deceive a necessary component?

The intent to deceive is definitely a necessary ingredient. In the class that I’m currently teaching to Berkeley undergraduates, we separate news that’s a hoax from bad reporting, satire, and unintentional misinformation. Traditional media makes a similar distinction: in cases where inaccurate information has been reported — stories about weapons of mass destruction in Iraq being one famous example — mainstream media sources will issue a correction. Fake news sites don’t issue corrections. Unfortunately the original mistake and not the correction is the one that “sticks” in readers’ minds, and it can have important consequences before the correction is issued. The Washington Post report that Russia attacked a utility grid in Vermont is a case in point.

A year ago, fake news was not the kind of issue it is today. What changed, especially in the run-up to the presidential elections and in the months since?

Fake news has been around for a long time. Think about the so-called “birther controversy”: it was completely fabricated, but referring to it as a “controversy” gave traction to the idea that facts were in dispute. Nor is it new for fake news to have far-reaching effects. I ran into an interesting story from World War I: the British, who were trying to persuade China to enter the war as an ally, planted a story in the Chinese press alleging that the Germans had “corpse factories” where the bodies of dead soldiers were rendered for soap. This story got picked up in newspapers around the world. It had the desired effect of bringing China into the war on the side of Great Britain, but then in the 1930s Hitler and Goebbels used it as an example of deception by the mainstream press (which they vilified as the “Lying Press”). The “fake” story helped to undermine confidence in a free press in Germany.

But back to the 2016 elections… one motivator for fake news was financial incentives for clickbait. (Those incentives have even become stronger). When every page view on certain sites garners a few cents, thousands of clicks can generate revenue for the site owners, and that’s how you end up with teenagers in Macedonia running fake news sites about the US elections. The Russian propaganda machine appears to have also been active in the elections, but there is no hard evidence supporting this claim. The influence of social media in our news habits was also a major factor. An increasing percentage of us (30% of the public) get our news via Facebook or Twitter news feeds, so we’re seeing only certain types of articles and we’re seeing them validated by our friends. The New York Times had a very insightful article on this phenomenon last August; I happened to read it while I was watching this dynamic play out in my own Facebook feed as my friends from grammar school posted odd articles from sites I had never heard of. They always perpetrated hoaxes — what we later came to call “fake news.”

We tend to think of fake news as something that other people fall for. But what are some of the mechanisms of fake news that we are all vulnerable to?

An article that doesn’t have a byline can be an indicator of a fake story. Other hallmarks can include photos that aren’t related to the article, sensationalist headlines that aren’t supported by the article, or grammatical errors. More subtle indicators can include a lack of sources, or a single, anonymous source. This applies to mainstream news as well: unverified sources can be a casualty of the rush to get a story out first. I’m at a point where I am skeptical about pretty much everything I read. The mainstream media has had to lay off journalists due to competition from online sources, and investigative journalism simply doesn’t have the resources that it used to. Mainstream media depends on advertising revenue, especially in their digital editions. Often the headline is changed in the digital edition to make it more sensational, encouraging the reader to click on the article. Articles are filled with ads that garner revenue, even if we don’t click on them.

The last class you taught for OLLI was on the refugee crisis, and the course led to an interest circle where some of the students looked into ways to help refugees in our community. Can you tell us about your work on this issue since that course was offered last Spring?

I joined that interest circle, and my husband and I joined Refugee Transitions (a local nonprofit) and did all their training. When I get back from Haifa, we will work with our first family, tutoring them in English and helping them get settled in the Bay Area.

After I taught the class last spring, we went to Berlin for two months, where we worked with refugees at the Tempelhof refugee camp in Berlin. I tutored them in German while my husband tutored them in English, and we helped them navigate the German bureaucracy, find housing and schools for their children, etc. We’re going back later this summer; I’m sure that the job will be different this time around.

During my time in Haifa I will also go to Jordan to visit the biggest refugee camp for Syrians, and I will also visit camps in Israel that are actually detention centers for migrants from Ethiopia, Eritrea, and Sudan. So I hope to learn a lot from this trip. The global refugee crisis is one of the biggest and most intractable problems the world faces today, and I plan to continue to focus my “scholar-activism” on this issue for some time to come.

Read a 2009 interview with Beverly from our archive.