Anna Sophie Loewenberg has spent decades reporting on China for media outlets such as NPR and AP Horizons. She is the co-creator of the Sexy Beijing series. Her documentary films have been reviewed by CNN.com, Timesonline, and Newyorker.com and have over 15 million views worldwide. She holds a master’s from the Columbia Graduate School of Journalism.

What brought you to Beijing, and how long did you live there? 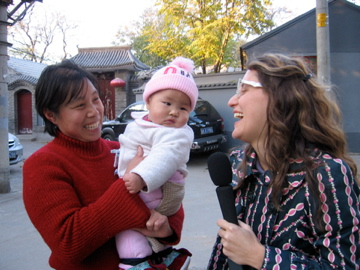 I moved to Beijing I moved in 1996 and lived there for the better part of 20 years. I first moved there because was I very curious about China. I have family history in China: my father and my grandfather were German Jews who fled Hamburg in 1933, the year Hitler came to power, and lived in Shanghai until the Japanese came in 1936, when they moved to the United States. There were always these tales of their life there, and photos because my grandfather was a photographer; it seemed like this mythical place that had played such an important role in my family history. I had the opportunity to go to China with a volunteer organization, and I left three weeks after graduating college. I was teaching in a Chinese university. At that time there weren’t many private universities like there are today, so it was still very much a privilege to attend university. I very soon started working in media: even during that first year I was writing about the music scene there for some local and overseas publications, and that’s where my career in media and journalism began.

How did the Sexy Beijing series come about?

That was so fun. Before Sexy Beijing, I worked for a magazine called Beijing Scene, which was like the first English-language magazine of its kind in post-Mao Beijing. It was an English-language weekly that covered arts, culture, and these really interesting counterculture movements in Beijing, which was really the cultural center at the time. My editor at the time was Jeremy Goldkorn, who some people might know because he hosts the Sinica podcast and Supchina, and we worked together for three years on Beijing Scene until it was shut down by the government in 2000. The Chinese police came in and they basically shut the whole thing down, and I went to study in New York for a couple of years.

After I had been in the states for a few years, I got this itch to go back. Jeremy was living there, and he was working with a dear friend of mine from college, Luke Mine, running a little production company. When I found this out I felt like I had to go back, so I quit my job, sold my car, left my boyfriend, and went back to Beijing to run this production company with them. On my second or third day there we were sitting around brainstorming, and we started talking about YouTube, which at the time was not censored in China. We came up with the idea of Sexy Beijing because Sex in the City was a popular at the time with 20-something white-collar Chinese women, and often people would stop me in the street and ask if I was that lady from Sex in the City. Also, we were all in our early thirties and still single. So we decided to riff off of that… One of the things about living in China and speaking Chinese is that Chinese folks get really intimate with you really quickly in terms of wanting to know everything about you during an interaction on the street. As a journalist I was always out there interacting with people, and on a daily basis I would get these questions like “Where’s your husband?” and “Where are your kids?” People were always very curious, so I thought “Why not flip this around? Let’s do a show called Sexy Beijing. I’ll play the Carrie Bradshaw character and let’s make it about relationships and gender and issues that are changing now.” That same day Luke and I went out and starting interviewing people on the street and it was hilarious and enlightening. We learned a lot about Chinese culture through people’s intimate relationships, even through simple questions like “How did you meet your partner? or “Could you give me some advice about love?” It was really telling, and things just took off from there.

We didn’t just do the Sexy Beijing show. We had a show we called the Hard Hat show, we had a music show. It was always important to continue documenting people who were making a statement through art and culture in China at a very exciting time. From 1998 through the Sexy Beijing era, there was just people were just so brave and so creative and so innovative and our other shows were focused documenting that.

You already mentioned one of the complications of living with censorship with the offices of Beijing Scene getting shut down. What were some of the other intricacies of producing media content in China?

I don’t know what it’s like now because we left a little under a year ago and also I stopped filming three or four years ago. I don’t know whether there are people there doing what we did, because it’s much harder to get a visa and some of the repercussions are scarier now. When Beijing Scene was shut down, we all kind of fled and our editor-in-chief was in jail for a few days but then they let him go. I think that for Chinese folks there has always been this dark cloud and this heavy hand; even for people we interviewed we knew there could be real consequences. It’s different now, but in those days we all kind of learned how to live in the shades of gray. There was a feeling that there was a little danger out there; there was a presence we called “the auntie” on the internet. It had real implications for us because what happened was that our shows became very popular on YouTube and we had this huge following and then boom, they shut down YouTube, Twitter, and all these platforms we were using. Even the Danwei, our website, was blocked at one point. So that was serious.

But just in the day-to-day, you never knew when the police were going to show up at your doorstep and and say “This housing is not for foreigners. You need to get out in 24 hours.” That happened to me a few times. And I think also the sense that what you’re building, whether it’s the production company or a creative endeavor or whatever, that the rug can be pulled out from underneath you.

When we filmed on the street we self-censored to some extent by sticking to topics that could be acceptable enough that we wouldn’t get kicked out of the country, because we didn’t have foreign correspondent visas or anything like that. But there was always that shade of gray. For example, in the Sichuan earthquake [in 2008], a lot of the buildings were very poorly constructed due to corruption, and a lot of schools crumbled and children died as a result. There was a lot of outrage around that, but it was also a very sensitive thing so it was difficult to film. We did go down to Sichuan and we filmed, but we filmed with a couple of musicians who were making music with some of the children who were survivors. Our production company wouldn’t go down there and do an AP-style news piece because that was too dangerous for us, but we though this is also an important story. There were checkpoints and police and we had to duck down in the van and hide. You get kind of a thick skin in those conditions, but you pick and choose which risks to take...

You started work in Beijing just as the internet was taking off. Could you say a few words about the impact of the internet on popular culture and on freedom of expression in China?

From where I stand, the internet has been everything. It has completely changed the consciousness, first of young people and then of everyone. For example, I was very involved in the music scene in China, and during my first five years there, musicians could not get music from the outside. People would listen to the same CD over and over. Any kind of artist was hungry to know what was going on in the West, and there was really that feeling of an iron curtain between them and the rest of the world. It was the same with books and any other kind of access to information: people were so hungry for it.

When the internet came it changed everything. Just in my world of artists, more people were speaking English and they had access to all of the same films and information. It changed Chinese design, it changed Chinese music. In some ways a lot of things became more commercial and less interesting, but people became very savvy very quickly. With access not only to the internet but also social media, a lot of young people in China knew more about what was going on in the world than I did. It gave people this empowerment, this access to communication where there had been none. Ai Weiwei is another example of that: it was his campaign on social media that attracted so much attention to what was going on with him and the pressure the government was putting on him.

So — spoiler alert — I did find love, which is part of what killed the Sexy Beijing project, I had my kids in Beijing. What brought us back was actually the pollution. THe pollution was getting so serious in Beijing: 400 and 500 AQI, just off the charts. During my daughter’s first year of life there was a full month in Beijing that the smog alerts were so high that we couldn’t leave our apartment. Days like this [with an AQI of 190] in the Bay Area are like clean air days in Beijing. It was getting so surreal to see everyone with face masks, and every two or three weeks you had to shut your life down. So that was really hard.

My current project is launching a few audio podcasts. I’m launching a Mandarin-language two-way; it’s a conversation between myself and a Chinese gal. She’s the Beijing-born American, and I’m the American Beijinger, so we come with these two different perspectives on life in America. Our audience is a global audience in China but also this huge population of Chinese-Americans who are not proficient in English. We want to take on what we feel are the most important issues of American culture: race, political engagement, and things we feel that a lot of Chinese here don’t have access to. A lot of them don’t really have experience engaging in a democracy, so we really want to take that on in this podcast. I’m also working on a couple of other podcasts, including one on popular culture in China.