Anastasia Edel is a Russian-born American writer and social historian. She’s the author of Russia: Putin’s Playground, a concise guide to Russian history, politics and culture. Her writing has appeared in The New York Review of Books, The New York Times, Quartz and World Literature Today. She’s a staff art critic for the Piedmont Post and is currently at work on a new book, The Gone Empire. 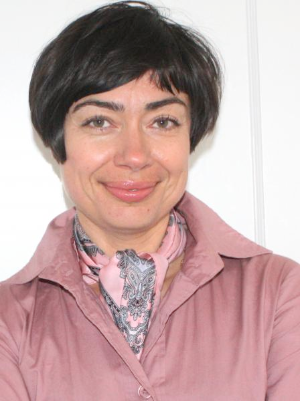 How long did you live in Russia, what brought you to the United States, and where did you live along the way?

I was born in the USSR — a country that is no longer on the map, which is quite amazing because you thought it would be forever. I came of age as a Soviet citizen: I was born in 1972 so I was in middle school when perestroika started and things began to shift. Things accelerated in 1989, and then in the 1990s the Soviet Union disintegrated. On the radio they said they had signed an agreement which basically said there was no more Soviet Union but instead the Commonwealth of Independent States. That was a very mundane pronouncement, and I don’t think people realized that it was the end of a huge historical era. Not much changed initially, except that things were harder and harder economically: they were practicing shock therapy with the transition from a planned economy to capitalism. And most of the people I knew were very happy that the Soviet Union collapsed, because it wasn’t a pleasant place to live. Now everybody forgets that; now they all think “what a wonderful time we all had in the communist paradise” but that wasn’t so. So by the time I graduated with a degree in languages in 1993, it was a very different country. Business and entrepreneurship had been suppressed; now they were encouraged. But also it brought about a lot of weird things, like criminal organizations who would all of sudden become businessmen. There was also this big period of privatization where they were taking what had been owned by the state and basically buying it out. And McDonalds started appearing in Russia; overall it was a very strange time.

My degree in languages allowed me to work with western firms and get into opportunities like business and travel. So I was working as a fiction translator for a while and then I got a job with this British company doing very esoteric things like buying raw commodities in Russia which would then be sold in Rotterdam. Then I heard about this program called British Council, it was a British organization that sponsored people willing to get a business education. And so I applied thinking I would go for three weeks, but then they called and asked me if I wanted to get an MBA in England.

The MBA was a huge challenge. We had a planned economy: there was no such concept as supply and demand, price elasticity… I was mostly worried about my language skills, but the language was fine. I just couldn’t understand what I was reading. So the first semester was very stressful: I was thinking “if I don’t pass, they will send me back to Russia” but luckily I got all Cs. That was enough to get by, and then my grades started steadily improving.

My time in England was when my life really changed. I thought I would not go back, and I didn’t. In England I met my husband, who is Russian but was already living in Boston, so I made the decision to move to Boston. We lived there for about eight years before my husband was accepted to an MBA program at UC Berkeley, and we have lived in the Bay Area ever since.

The course description that you sent us asks which national myths, beliefs and historical developments feed Putin’s anti-democratic ideology. Could you give one or two examples of that phenomenon?

To understand Russian history today it is important to understand not just Putin, because Putin is one man who ended up at the head of the country, but also to understand the attitudes, the myths, and the beliefs that either emerged on their own or were stoked specifically to advocate for certain strategies and behaviors. In the case of Russia: when the West was already undergoing enlightenment, Russia was still under the Mongol yoke. The 300-some years of Mongol rule were a huge influence on how Russians perceive themselves as a nation. They perceive themselves as being under constant threat of invasion so it’s very easy to stoke those fears and mobilize them against some kind of external threat, whether it’s real or not. And the state itself is built up as a centralized system where resources can quickly be pulled up for military purposes and it has been like that since Russia’s emergence from the Mongol conquest. There’s also the myth of the “unique path”: Russia has a unique way, very different from the West. Mostly it’s related to the Orthodox religion, which is considered to be “the right” religion, and this belief that Russian people are superior to everyone else because they have the right communications with God and they follow the actual true way. That is very present now, which is amazing to me because I grew up in an atheist state where God had been… cancelled. But those things can very quickly be pulled out of the nation’s unconscious, dusted off, and manipulated. Russia has these messianic ideas: probably like America does but in Russia they just took different shapes. Like the Communists thinking that they are changing the world for the best, that it’s the role of the Russian people to shine the torch of freedom and social justice and lead us to happiness, and that’s why we had to make all these sacrifices.

Do you find that your background in language and literature shapes your perspective when you write about politics?

My literature studies really defined me, and I have always had a love affair with the English language. The language itself, and also the language as a means to block the reality of the Soviet Union and to escape. It opened a very different world, one where I was not constrained by the Iron Curtain, by inability to travel, so that enabled me to live in two worlds.

My first job was translating fiction, but the payment for that work was almost like a mirage. It was right in the middle of hyperinflation and I would be promised what sounded like an incredible amount: 20,000 rubles, which was a year’s stipend. But translation takes time, and by the time I translated a book, that amount would be worth almost nothing. So moneywise it was not feasible to work with literature and I wanted to try new things and business seemed like such a good opportunity. But literature makes you think more deeply about the world and trying to understand why. As I began writing more and more and more, I felt that people who go into writing are people who want to understand the world. So I never write just about something that interests me on the surface level; I always look for connections to human existence or our understanding of the world. So in that way, yes, it does inform what I do.

And you’re also a fiction writer.

I was trained as a fiction writer in the MFA program [at Pacific University] and it’s something that I like to do: I’ve published short stories and written a novel that I’m currently looking for an agent for. But after the 2016 election — and this is a sentiment that a lot of my Russian friends who are writers share, and I’m not sure how much it translates to American writers — but it’s almost a sentiment that you can’t afford to make stuff up at this point. I think it was Mayakovsky’s line that “the pen is a weapon,” but a writer’s pen is always considered a weapon in the service of some cause. So I just couldn’t bring myself to use it for fiction writing. I started writing more political pieces because I feel that the experience we have had in an autocratic country must be shared: autocracy, how it happens, and the wars and the suffering it brings. So I write almost no fiction these days; I feel like [cultural and historical commentary] is where whatever skill I have with words will be put to best use.

Anything else you want to add?

I am teaching this class primarily because I want to have a conversation about Russia. When I left Russia and the Soviet Union collapsed, Russia became kind of this international backwater: the Evil Empire disintegrated and then no one was really interested. In 2014 when Putin annexed Crimea, Russia became a subject of conversation again but on a much smaller scale. That’s why I wrote the book that I wrote, Putin’s Playground, because it catalyzed a lot of thoughts that I had watching Putin’s rise from afar. Because we had made a choice to leave, I never felt a moral right to criticize what the Russian people were doing. But then Crimea was kind of a wake-up call for a lot of Russians. We couldn’t believe it. The country that we left, the country of Yeltsin, was moving towards democracy. Maybe haltingly, but that’s where it was heading. That’s not where Putin took it, and Crimea proved what we felt about his rule and his autocratic tendencies. So I wrote that book, and when I was writing it I thought I was writing for a very narrow group of people. But then when the interference in the 2016 election happened, all of a sudden Russia became mainstream news. I can’t say that this was a very pleasant kind of debate to have: how one of your countries undermined the democracy of your other country. But I also found it impossible not to talk about it. Not in the way of trying to acquit Russia of wrongdoing, but more to look at the country in some kind of structured setting and understand why Russia behaves the way it does.