Dr. Alexandra Amati-Camperi teaches at the University of San Francisco, where she founded the music program in 2000. She also lectures for the San Francisco Symphony, SF Opera, and other groups. 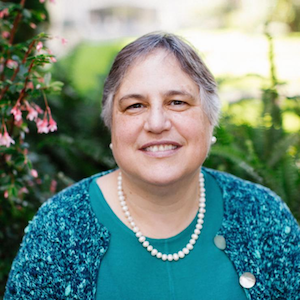 When I finished high school, I initially wanted to study math, but I quickly discovered that my university program didn't offer the type of applied math that would have interested me. My other love was Slavic languages, so I quickly switched programs and began studying Russian, Polish, Czech, Bulgarian, etc. with a focus on philology, Church Slavonic, and the history and evolution of these languages through written texts. Meanwhile I was also at the conservatory studying piano and composition.

When I finished my undergraduate work, I wanted to combine those two passions and apply philology to music. Italy didn't offer the types of musicology programs that interested me, so I applied to graduate programs in the United States.

I chose American graduate programs in part because my parents were familiar with them since they had gone through them (in fact I was born in Boston, though I grew up in Naples). My parents had fled Argentina to escape the dictatorship: when I was born my father was a postdoc at MIT while my mother pursued her Psychiatry residency in one of the Harvard hospitals. Everyone in my family speaks multiple languages; it's a common part of the Jewish diaspora.

Your upcoming courses on the concerto look at the concerto both musically and historically. What sets the concerto apart from other musical genres, and why are its cultural and social aspects important?

The concerto combines a large group (the orchestra) with a small group or individual. Using the orchestra as a symbol for society is a very old motif; the concerto can portray the relationship of the individual with the community as collaborative, competitive, or antagonistic.

The concerto evolves over its history. In the Baroque period, we see a more varied family of genres: vocal pieces, a small orchestra with a larger orchestra, etc. In the Classical period it crystallizes into the form we know now: a piano or violin (or, more rarely, another solo instrument) plus an orchestra, with the individual -- the virtuoso -- taking center stage. In the Romantic and Post-Romantic periods, the concerto morphs into a vehicle for emotions that can be either individual or communal.

One of your research interests is a feminist critique of opera. Could you tell us more about that project?

I wrote a book (currently under review) about how the way women are portrayed in opera reflects the position of women in that society. Since there are so many facets to this question, I use the myth of Orpheus as a thread through historical eras. In Monteverdi's Orfeo -- from 17th-century Venice -- the death of the heroine is embedded in her voice (in her musical style) from the beginning. By the second half of the 18th century -- specifically, in Gluck's Orfeo ed Euridice -- women are portrayed in ways that are discordant with the stories the operas are based upon. I discovered that Freemasons were involved in the creation of some of these operas; the Freemasons tended to be (and still are) suspicious of women.

Many of your projects use music as a lens into larger historical and cultural questions. What does music have to teach us about the history and culture of a given period?

A lot! USF's performing arts major is actually Performing Arts and Social Justice, so our whole curriculum approaches the performing arts through a political and cultural lens. Why is medieval music almost always religious? Because the Catholic Church not only had wealth and power, they also controlled a high percentage of manuscript production: parchment, copyists, etc. Why is there so little music from Renaissance women? They weren't allowed to. Why do we know so little about Clara Schumann? Why did Felix Mendelssohn take credit for his sister Fanny's compositions? Because of the circumscribed social roles available to women at that time. Same here and more recently -- for example New England composer Amy Beach wasn't allowed to perform after she married, though fortunately she outlived her husband enough to publish a lot of great music. Music reflects and gives voice to broader social themes, and it is very much worth studying in that context.

In addition to your work at the University of San Francisco, you also give lectures for the San Francisco Symphony and SF Opera. What do you most enjoy about working with lifelong learners?

Everyone in the room is passionate about learning, and it's so rewarding to share my passion and see it spark something in the audience. I want to learn from my students as much as they want to learn from me, so these courses are very fulfilling for me as well.